6 charged with animal cruelty in cockfighting investigation [with photos] 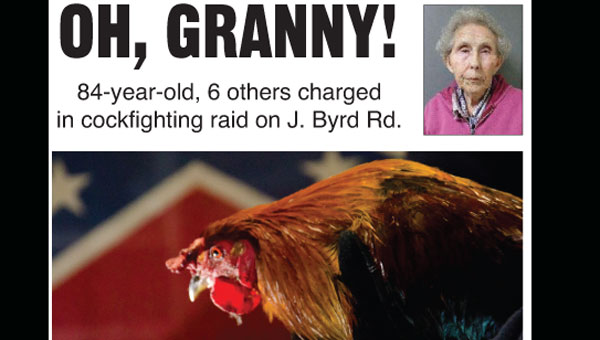 Authorities raided a Covington County property, arrested six suspected cockfighters and seized nine birds. The raid was the result of a joint investigation among several Alabama law enforcement agencies and The Humane Society of the United States. The residence was located on J. Bird Road near Babbie.

According to a press release from the Humane Society of the United States, investigators found cockfighting paraphernalia on the property, including razor-sharp gaffs, which resemble curved ice picks, and injectable drugs. Alabama Alcohol Beverage Control Board investigators, the Covington County District Attorney’s office, the 22nd Judicial Drug Task Force and Covington County Sheriff’s Office were on the scene to assist with the raid.

Six cockfight attendees were arrested and charged with aggravated animal cruelty. Three additional arrests were made and misdemeanor charges were filed.

Arrested and charged were: 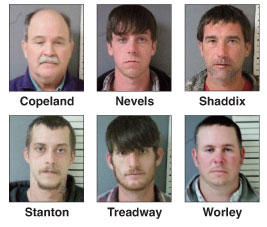 Cockfighters often strap metal devices to the ankles of birds to make the fighting more deadly.
Photo courtesy of Frank Loftus/For The HSUS

Chris Schindler, manager of animal fighting investigations for The HSUS said, “All of the roosters we found had been brought to fight to the death with knives tied to their legs. We commend the Alabama Alcohol Beverage Control Board for their quick action to shut down this cockfighting pit. This rescue further exemplifies the need to strengthen Alabama’s cockfighting law and put an end to this barbaric practice.”

The HSUS assisted law enforcement in examining and documenting the birds on the scene. Experts from The HSUS and investigators with ABC were on hand to help identify and document evidence and coordinate the rescue effort.”

The Humane Society of the United States Animal Fighting Investigations Unit assisted several Alabama law enforcement agencies in a suspected cockfighting investigation and raid in Covington County, Ala resulting in arrests of suspected cockfighters and the seizure of birds. Some of the birds were dead or dying on arrival, and all had injuries consistent with cockfighting
Photo courtesy of Frank Loftus/For The HSUS

When a snowstorm transformed south Alabama on Feb. 12, 2010, Dr. Bob Bush went skiing on the golf course of... read more