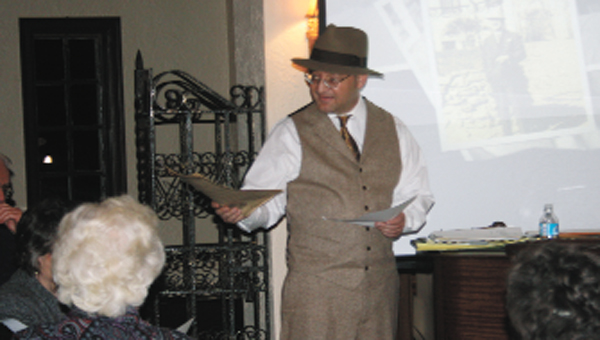 Covington Historical Society President John Scherf dons a fedora during Thursday’s meeting as he tells members of the life of his great-grandfather, John. G. Scherf.

The Covington Historical Society broke from their normal meeting arrangements Thursday night for a special gathering held at Springdale.

Scherf said his great-grandfather, a German immigrant, came to America in the early 1900s and lived briefly in the Carolinas before settling in Andalusia, where he founded the company that would later become Alatex.

“He was an immigrant that came over here and lived the American dream,” Scherf said. “And he was very successful. Alatex helped put Andalusia on the map.”

Scherf said the company, which his great-grandfather began in 1923, originally made underwear, before incorporating as Alatex in 1929, and becoming one of the largest producers of men’s dress shirts in the country.

“It was often said that one in 10 men in America was wearing a shirt made in Andalusia,” Scherf recalled. “That’s really something.”

At its peak, Scherf said Alatex employed roughly 1,500 people in Andalusia alone, and approximately another 2,000 workers at plants throughout south Alabama and north Florida.

But Scherf said his great-grandfather was more than just a businessman – he was a servant of the people of Andalusia.

“He started in 1919 as the CEO at the chamber, and he resigned that post in 1923,” he said. “He also served as mayor for four terms. He ran unopposed each time.”

Scherf said his great-grandfather stepped down from office in 1948 after serving 16 years as mayor, a time during which he modernized many aspects of the city’s government, balanced the budget and oversaw the construction of a new city hall (now the municipal court building).

J.G. Scherf also served as president of the Andalusia Rotary Club and was a Free Mason.

Scherf said his great-grandfather passed away in June of 1949, but left a legacy in Andalusia that will stand the test of time.

“What he gave Andalusia was a sense of pride that never went away,” he said.

The Covington Historical Society meets monthly at Andalusia Public Library. Membership is open to the public and annual dues are $25 for a single member and $40 for a family.

The Huestess family did not arrive in Covington County until the late 1800s. As they settled in Hallton, a community... read more