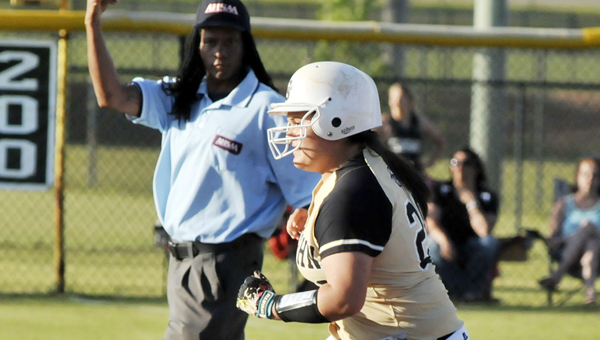 Straughn softball coach Kenny Skipper wrote down seven things his girls had to accomplish to beat Opp on Thursday.

The Lady Tigers accomplished each one as the defeated the Lady Bobcats 7-1 in area action.

A five-run first inning and a strong hitting game paved the way for SHS to take over.

“That was real big getting some runs early, getting some hits and putting some pressure on their defense to make plays,” Skipper said

Skipper said despite the girls doing what they needed to do on the field, there’s still some work left to be done.

“We’re playing together and we’re having fun,” he said. “Good things are happening.”

Good things did happen in the first inning.

Molly Stewart reached on a single and scored on one of Opp’s two errors for a 1-1 tie. Jacie Williamson later scored on a passed ball to make it 2-1.

Katelyn Kinsaul then hit a double and made it home on a throwing error for a 3-1 lead.

Kristen Peavy hit a solo home run for a 4-1 lead, and Colby Adams rounded out the inning with a RBI double.

From there, the Lady Bobcats’ sails went limp.

“Straughn played an awesome game,” OHS coach Jimmy Reeves said. “They pitched well, they hit it great. They just beat our tails. There isn’t anything I can say, except that Straughn played a great ball game.”

The Lady Tigers outhit OHS 11-3 in the win that put them at 13-9 on the season, and right now in a three-way tie with Excel and Opp for first in the area.

Opp scored its only run in the first inning, during which it was looking to score a lot more.

Derriunna Gantt put together a seven-inning performance on the mound for SHS as she allowed one unearned run on three hits and had six strikeouts.

Skipper said every day at practice, he preaches to be selective and yet, aggressive.

“We’re going to hit the first strike they throw us, and if we’re down the count, we’ll battle to foul it off and look for the right pitch,” he said.

The Lady Tigers had two strikeouts for the game in their first meeting with OHS since the south regional last season.

Courtney Chatham, Katlynn Schively and Kelley Pierce had one hit each for OHS.

Straughn starts play in Andalusia’s annual tournament today, while Opp plays in a tournament at Ariton.