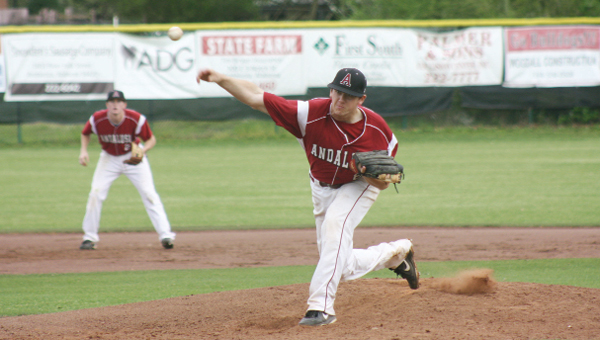 Andalusia pitcher Ross Graham led the team to a 9-0 victory in game one with eight strikeouts.

Defense wins championships, any coach will tell you, and Friday it won two straight area games for the Andalusia High School Bulldogs, as they shut out the Tigers of Monroe County in consecutive matchups at home on senior night.

“Defensively we played well all day,” Andalusia head coach Tyler Dent said. “And that’s what we preach. We could have hit a little better in the first game. Our pitchers threw well through both games.”

The 10 seniors honored Friday night showed the crowd the impact they have on the field, leading their squad to victories of 9-0 and 14-0 over the Tigers.

In game one, senior pitcher Ross Graham led the Bulldogs with eight strikeouts.

Offensively, AHS kicked off their scoring bonanza with with RBIs from seniors Quinton Maddox and Grayson Campbell, who batted in runs from Brandon Smith and Jud Rogers respectively, to jump off to a 2-0 start in the bottom of the first inning. The Bulldogs rode their 2-0 lead into the fourth inning, when Campbell crossed home plate again.

Rogers tacked on another score in the fifth, followed by scores from Maddox and Campbell off the double RBI of Daniel Henderson. The Bulldogs batted around in the fifth, and Henderson found home plate off the RBI of Graham. A double RBI from Smith scored runs by Graham and Brayden Burkhardt to finish the inning, and give AHS the 9-0 victory.

Monroe County failed to put up points on their next at-bat, and the Bulldogs finished the night with 14-0 shellacking of the Tigers in just five innings.

For game two, Maddox got the win from the mound.

Dent said area wins are always big, and the Bulldogs (16-8) have just two chances to earn them left after notching Friday’s victories.

“We play Opp Monday night, and they are playing great ball right now,” he said. “We play Wilcox next Friday, and those are our last two area games.”