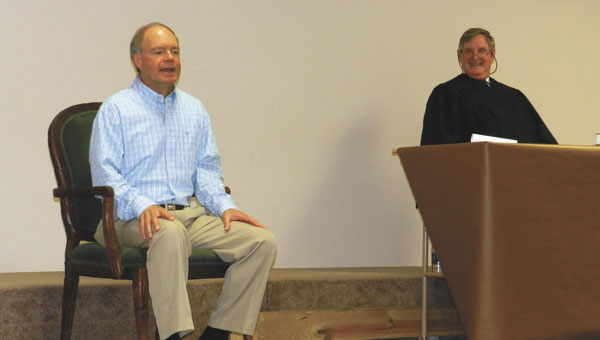 District Judge Frank L. “Trippy” McGuire found himself on a witness stand, answering questions about disturbing the peace, terrorist pranks, gator chasing, skinny dipping and muggings in a kangaroo court that was a part of his retirement celebration.

And the joke was on the judge, who is known not only for his photographic memory and virtually total recall of names, but also for his love of pranks. He said later he had no idea what was planned for his party, held in the community room of Opp’s First Baptist.

McGuire was sworn in as a witness after being asked to “affirm on the wings of the war eagle” his testimony would be true, and asked to provide “all the truth that’s fit to tell.”

Every time the “prosecutor” posed a new question, McGuire got visibly tickled.

“Do you recall being present at a Bible study in which there was a vigorous debate by Elders Gary Hall and Charles Willis concerning cell phones at church,” she asked.

When McGuire replied in the affirmative, “Howe” asked him to describe what took place.

“Well, Gary was in a long harangue against cell phones in church,” McGuire said. “So I went ahead and called him and his phone went off.”

The next charge was “accessory to indecent exposure.”

“Do you recall your 25th anniversary trip to Little Palm Island,” the “prosecutor” asked.

“And do you recall taking a small Boston Whaler out to a reef to snorkel?”

McGuire said he was a mile out and noticed a couple in the water.

“I knew they were either Olympic swimmers or they were in trouble,” he said. “I waved and they motioned for me to come over. I said, ‘Can I get y’all something to drink?’

“They told me they had lost their boat and their clothes,” McGuire recalled. “The husband said it was his wife’s fault, because she wanted to go skinny dipping and he forgot to drop anchor and lower the sail.

“I told him you always drop sail before you drop trousers,” McGuire said.

“I didn’t have a towel or anything. All I had to offer them was a mask and a snorkel,” he said. “So the husband sat up front with me and the wife got in the back and we got them back to the boat.”

And the “prosecutor” asked, “And is it true that the older you get, the more embellished this story becomes?”

The retiring judge also was asked about his history of Christmas Eve muggings.

“Well, the Episcopal Church always has a midnight mass on Christmas Eve,” McGuire said. “So we had to have something to do until church started. We would stage these fake Christmas Even muggings.”

The boys would wrap boxes. One would take the would-be packages from the car, while the others hid in the bushes and waited to grab the gifts and run, startling passers-by and prompting reports of muggings.

“And how long did this go on,” she asked.

“Until about three years ago,” McGuire said.

Asked about his terrorism activities “involving exploding bombs stuffed inside candles” at his grandparents home, McGuire explained that his grandparents neighborhood had 6-foot concrete block wall that went through five or six yards. The cousins made a game of crawling or walking the top of the wall without falling. At the last yard, the homeowner didn’t cotton to little boys playing on the wall, and called her husband to get the shotgun.

In return, his cousin had a plan. He produced a Maxwell House coffee can from his parents’ car in which he had hidden three candles, an ice pick, cherry bombs and matches.

The boys proceeded to make holes in the bottoms of the candles, then put the cherry bombs in them. Three of these were hidden near the azaleas of the Old Government Street home in Mobile.

The boys lighted the candles, then went to their grandparents’ home to shoot basketball. The first explosion brought neighbors out of their homes, he said. Five seconds later, a second explosion followed, and a third one was on the heels of that.

“Our parents looked around and said, ‘At least our boys were at home playing basketball,’ ” he recalled.

He also was quizzed about a “terrorist” incident at a birthday party for Ryan Cook.

Ryan was a friend of the McGuire’s youngest daughter, Jan. When each was having a birthday party on the same night, McGuire planned a prank.

He gave Ryan’s dad, Lee Cook, a sign, then hid in bushes near where the boys were outdoors playing football that night.

The elder Cook went outdoors and told the boys he’d just had a call from the Opp Police Department about a jail break.

“He told them the prisoners were armed and dangerous, and they needed to be careful,” McGuire said. “Because you know Opp is where all escaped prisoners go.

“When the girls began to chant ‘We ready,’ which is what the Opp Bobcats said at the time, Lee came out of the house. I had a pistol and shot a blank. Lee falls beautifully in full view of his son, and all the boys run into the house where Ryan tells his mother to call the police because his daddy had been shot.

“Luckily, my homeowners insurance covered all of their therapy,” McGuire quipped.

After hearing the charges “Judge Hare” said, “I do take judicial notice of all the joy you have brought into the lives of those around you with your wonderful sense of humor. Your ability to convince each person you met that he or she was important to you epitomizes Southern charm. The magnificent way in which you have dispensed justice throughout your too-short judicial career as always tendered with caring and compassion. Your consistent honest, far dealing has established you as a legend in this county.

“The people of this county have been truly blessed by your service and you will be sorely missed,” he said. “With that said, I now sentence you to a happy retirement.”

McGuire’s friend Chuck Burgess also roasted him, recounting adventures they’d had with their children and their friends.

Burgess said it wasn’t unusual for McGuire to call rather late at night and suggest gator chasing. He recalled one night when they piled their children in McGuire’s circa 1978 suburban and went to Open Pond to spotlight gators. McGuire was an assistant DA at the time. At Open Pond, they met a deputy patrolling, and visited with him.

On the way home, Burgess said, they passed some soybean fields.

“Trippy said, ‘I wonder if there are any deer out there,’ ” Burgess recalled. “We had the headlights and the spotlights going when all of a sudden there were blue lights behind us.

“Trippy said, ‘It’s just the deputy. He thought of something he needed to tell me.’

“But it was the game warden,” Burgess said. “He came up to the car, put his light in our faces and stopped. Then he turned around to his wife, who was with him, and said, ‘Honey, you’ve got to come here. I’ve caught the prosecutor and my dentist.’ ”

McGuire also was honored with a reception at the courthouse Friday afternoon.