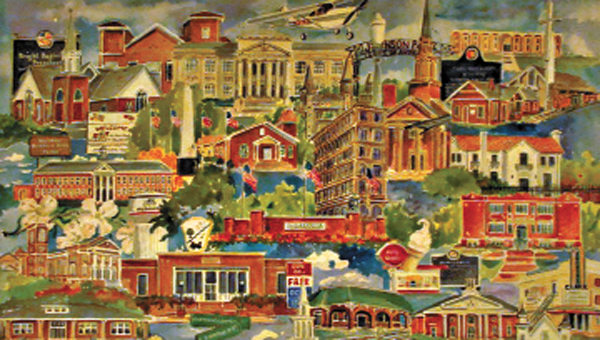 Shown is Roger Powell’s newest work in which he depicts iconic Andalusia places. He’ll be honored with a reception at LAAC tonight.

For almost 40 years, Roger Powell has been creating architectural portraits of homes, schools, and public places that have sentimental meaning.

Best he can recall, he started in the 70s.

“I had done a lot of other things, and had shown at the Patchwork Derby,” he recalled Monday. “Marilyn O’Neal’s mother asked me to do a painting of her house, which was on East Three Notch Court.”

And for the past 40 years, the demand has grown.

“I have progressed from sitting in the yard drawing and painting, to painting from a photograph,” Powell said.

When he was asked months ago to do the show that opens tonight at the Lower Alabama Arts Coalition, he set to work on a new painting that incorporates 40 iconic images of present-day Andalusia, although many of them have to do with the past.

“I got the idea about two years ago,” he said.

He collected photographs and developed the ideas for the painting.

Powell said he ran out of room on his canvas, but the result has been very well received. When there was initial interest in the painting, he worked with a printer in Panama City to create prints and note cards of the painting. The first printing of note cards is sold out, and the large prints are well on their way to the same fate.

Since completing the painting, he’s come up with new ideas of similar projects.

The new show includes a number of his pieces that are for sale, as well as pieces he’s borrowed from clients for the show. It also includes pen and ink drawings from a series on local churches he’s working on, and there are also prints available of some of those.

Powell said the architectural portraits are great gifts. Many times, he said, he has recreated a place from “just a corner of a photograph.”

“It evokes a memory, many times of a place the family no longer owns,” he said. “People tell me they don’t want me to paint something until the landscaping is right, but I remind them, we can fix that.”

While  he minored in art in college, Powell said the first time he was recognized for his work was first grade.

“I painted turtles hibernating in the mud,” he said. “I can still see it hanging in the hallway at East Three Notch.”

Both his mother and sister are also creative, he said. And he also credits Margo Russell with much of what he’s developed.

“I’ve always played with drawing and painting,” he said. “But I took classes with Margo in watercolor. She gave me a lot of the fun, joy, and excitement of watercolor.”

“I am a big supporter of theirs as well,” he said. “They do a good job of promoting the arts, as does Art Supporting Art, which is housed in the Church Street Cultural Arts Centre.”

“I hope everybody will come, not just to view my work, but to get more acquainted with what they do,” he said.