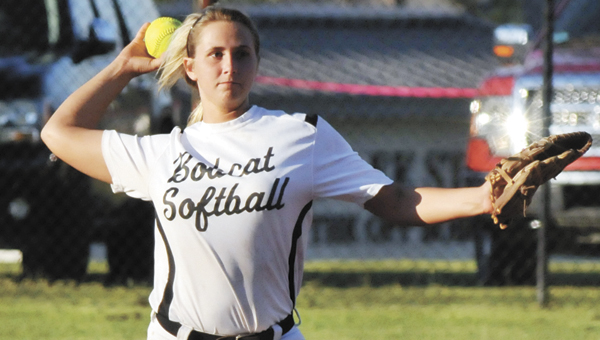 Opp’s Courtney Chatham throws to first base for an out Thursday night. | Andrew Garner/Star-News

Opp’s Courtney Chatham hit a walk-off RBI bunt in the bottom of the seventh to help lift the Lady Bobcats to a 4-3 victory over Class 6A Northview on Thursday night.

Chatham scored senior Kelley Pierce, who made it to third on senior Laiken Free’s double to right. Pierce reached on a single with one out.

With his No. 4 junior hitter at the plate, OHS softball coach Jimmy Reeves knew what the right call was going to be.

“She (Chatham) is our No. 4 hitter, but is also our best bunter,” Reeves said. “When we had that right there, there wasn’t any doubt in my mind. I knew, unless they made a super play, we were going to put something on them right there.”

Chatham’s bunt rolled just in front of home plate, forcing Northview pitcher Lindsay Massey to try the throw at home for the tag-out.

However, Pierce made it before the ball was delivered to score the game-winning run.

“I’m really proud to see my seniors Pierce and Laiken get a hit,” Reeves said. “That’s good to see your seniors hit in the clutch like that.

“We’ve been waiting on that all year,” he said.

The Lady Cougars erased an Opp 3-1 lead in the top of the fifth with two outs.

Those two outs came on good fielding from Free, who manned her post well by scorching the ball to first on ground outs.

Angela Bluie hit an RBI single to score Massey to tie it 3-3.

“If we don’t get those two outs, then they run us off the field,” Reeves said. “You never know. This game is funny.”

“Hope made some good plays,” the coach said. “Hope’s my No. 2 catcher, but we don’t lose when she’s in there.”

Maggie Short went 1-for-5 with a run; and Pierce and Free went 2-for-4 each for OHS.

The Lady Bobcats (17-6) scored three runs in the second inning on a two-run double from Pierce, and an RBI single from Sara Ballard.

OHS will be back in action on Tuesday at home against Straughn for an area game.

Before they get back to business, the Lady Bobcats are taking the weekend off and will be enjoying the Opp Rattlesnake Rodeo.