Driver: I just ran off the road 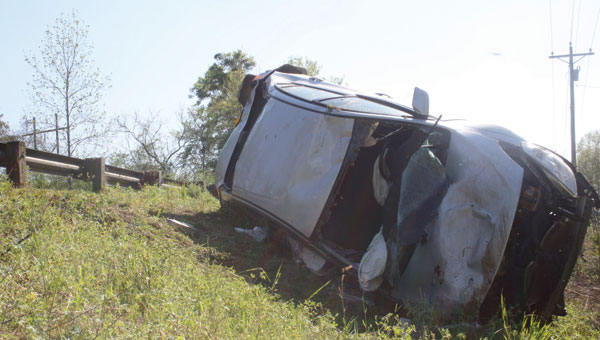 This Nissan Altima flipped and overturned on Thursday afternoon. The driver and the passengers were OK.

Three Brantley residents are OK, sans some cuts and bruises, after losing control of a vehicle on Point A Road Thursday afternoon.

Stephanie Campbell said she “just ran off the road” while driving a Nissan Altima eastbound towards Heath. Campbell said she and her two passengers, Shawn Bolding and Matthew Crowley, crossed the westbound traffic lane and left the roadway just before reaching a bridge.

The vehicle flipped at least once before coming to a rest on the westbound side of the small creek, which sheriff’s deputies said doesn’t have a formal name.

No other vehicles were involved in the accident and none of the SUV’s occupants sustained serious injuries.