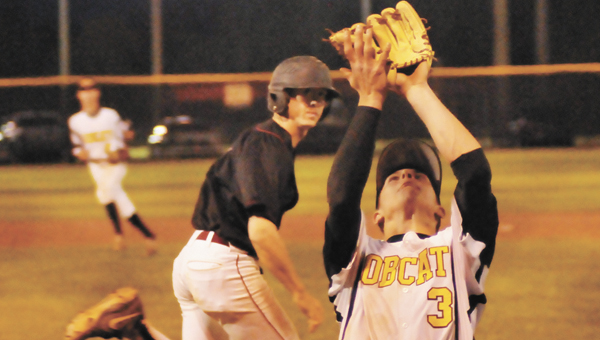 Opp’s Walker Messer makes catches a pop up for the last out as Andalusia’s Ross Graham looks on Thursday night. | Andrew Garner/Star-News

Opp senior Ethan Davis hit an RBI double in the bottom of the sixth and the Bobcats rose up to the challenge to beat rival Andalusia 1-0 at Merchants Field on Thursday night.

The game was scoreless through the first five innings, where both team clawed and scrapped on defense to hold the runs at bay.

Zane Hollinghead and Colt Harrell reached on a hit by pitch and a walk, respectively, to start the bottom of the sixth inning.

Davis then came up to hit the eventual game-winner to help send the feisty Bulldogs home with a loss.

OHS coach Michael Cassady said the situation called for his team to score more than one run.

“We had a hit and run on, and we tried to bunt and get an extra run,” Cassady said about the sixth, where the Bobcats had bases loaded with two outs. “They (the Bulldogs) made a good play and got us out.”

Andalusia’s Justin Scherzinger found himself in the sixth-inning bases-loaded jam after Walker Messer was intentionally walked.

Fortunately, Scherzinger zinged the next batter for a ground out at second to end the inning.

“Scherzinger pitched a great game,” Cassady said. “He had a lot of run (movement) on his ball. He wasn’t throwing it hard. He kept us off balance. When it was getting in the zone, it was moving away form us for the righties. It was messing with us.”

Scherzinger pitched six innings and allowed one run on three hits and struck out three in the loss.

Messer picked up the win for the Bobcats, pitching four innings after Landon Hughes completed the first three.

“It was a good ball game all around,” AHS coach Tyler Dent said. “Both teams did a great job. We hit a lot of hard balls right at people.”

While their offense was a little skewed, Dent said the Bulldogs’ defense looked good.

“We had a few wasted at bats, but those things will get you in a good ball game,” he said.

With this victory, the Bobcats improve to 21-8 overall and have won 12 out of their last 13 games. Additionally, OHS is on a 10-game win streak.

Bradyden Burkhardt and Daniel Henderson went 2-for-3 each; and Ross Graham went 1-for-3 to lead AHS.

Eli Johnson had a double; and Messer also had a hit for OHS.

Andalusia is back in action tonight in an area doubleheader against Wilcox Central at home. First pitch is slated for 4:30 p.m.

Opp hosts Class 2A defending state champion G.W. Long on Monday to close out the regular season before starting the playoffs next Friday.