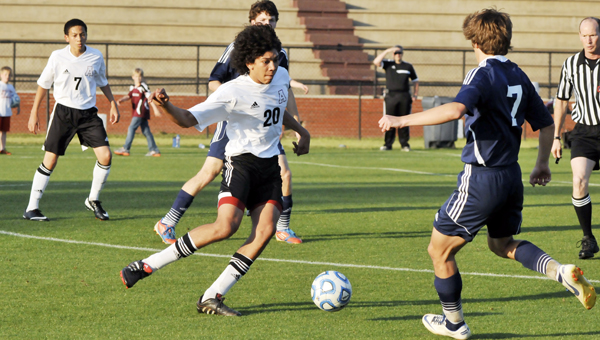 Andalusia didn’t get off to a good start Friday night as the Bulldogs fell 2-0 to Providence Christian in area soccer action.

The Bulldogs fell behind 2-0 early in the first half, played a decent second 40 minutes, but couldn’t overcome the hump.

“Obviously, I was very disappointed with that first half,” AHS coach Tim Ramsden said. “We came out very flat with not a lot of intensity. It was totally different compared to the last couple of games.

Those two goals by the Eagles led to the private school from Dothan to win the Class 1A-4A, Area 2 Championship. AHS will need some outside help from Houston Academy to have a chance.

Providence Christian’s Brad O’Donnell scored at about the 15-minute mark of the first half. His brother, Brett, then scorched a rebounded 25 yarder 16 minutes later for the lead.

Ramsden said the team played better in the second half.

“They played with a little bit more intensity,” he said.

The Bulldogs will be back in action on Tuesday night at home against St. Paul’s.