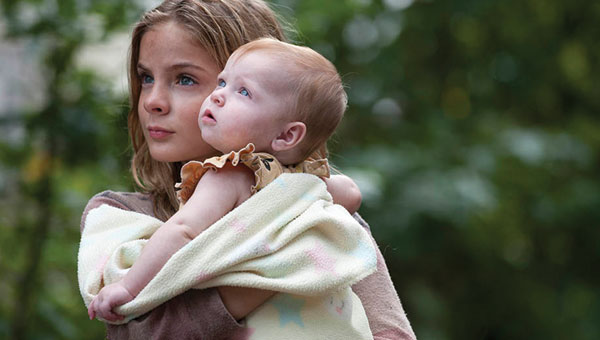 Shown is Eleora DiFranco as Judith Grimes, along with Lizzie Samuels.
Photo courtesy of AMC.

The first year of Red Level twins Elisea and Eleora DiFranco’s lives may be hard to top.

Before the girls turned a year old, they had already had roles in a hit television series and traveled to Africa on their first mission trip.

Mom, Stacey, who is originally from Atlanta, said she found online that a television series was casting identical twin girls between 6 months and a year old.

She sent a photo of the girls to the casting company.

“I just sent a regular photo of them in the stroller,” Stacey said. “That was in August, and in October we got called in for an interview.”

That’s when Stacey learned that the girls would audition for a role in “The Walking Dead.”

The girls landed the role of Judith Grimes over 99 other sets of twins. Judith, who is also referred to as Judy, is the infant daughter of Lori Grimes, and is the first infant shown to be born post-zombie apocalypse.

Stacey said she and the girls and their associate pastor’s wife spent 10 days in Senoia, Ga., filming.

The girls appeared in episodes 10 and 14 in season four.

“They are the fifth set of twins to play Judith,” Stacey said.

Dad, Michael, is a member of Fresh Anointing, and Stacey said they were worried about the girls being scared.

“We prayed about it, and we decided if they were scared we wouldn’t do it,” she said. “When they saw the first walker, they weren’t scared. The only part that really bothered them was the girl holding them screaming.”

Stacey said the girls received equal camera time, pointing out that if the scene needed an active baby, they would use Elisea and if they wanted a laid back one, Eleora got the part.

Additionally, the girls’ hair had to be dyed for the filming to make it red.

“They used organic die that comes out easily,” Stacey said.

Elisea and Eleora responded favorably to the traveling and being around new people, their mom said.

“They are used to traveling with Michael,” she said. “We travel so much with Fresh Anointing.”

The family used the money the girls made for a mission trip to Africa this year.

Fans of the girls can check them out on Facebook at E&E DiFranco, and they’ll be at the Rattlesnake Rodeo Sunday afternoon.