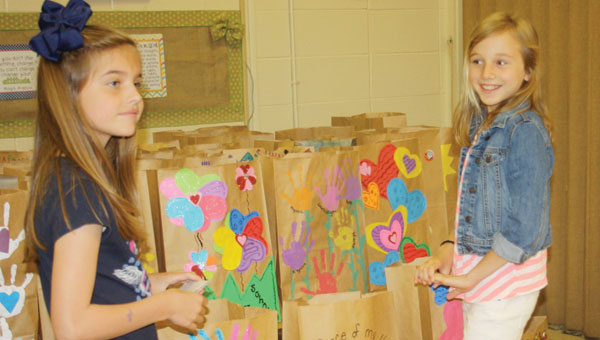 Like many American families, the students, faculty and staff of Red Level School have a member currently serving in the U.S. armed forces stationed in the Middle East. So, when the time came to choose a service project for the 2013-14 school year, the RLS family knew exactly what to do.

“Our assistant principal, Mr. Barry Woods, is serving in Afghanistan,” RLS reading coach Leah Grimes said. “We are all very proud of him.”

RLS counselor Brenda Johnson said Woods’ deployment with the U.S. Navy presented the perfect opportunity for his students back home to have a positive impact in the war-torn Middle Eastern country where he has served throughout the current school year.

“Each year, as part of our character education, we choose a service project,” Johnson said. “The kids are able to help with a need and the kids learn about that subject.”

With that idea in mind, students in all grades began collecting school supplies to be shipped overseas, with each grade responsible for a different item, or group items.

“We were in charge of sending pencil pouches,” RLS fifth grader Mitchell Baker said, adding his class learned some interesting facts about Afghanistan during the process.

“We learned about the weather over there,” Baker said. “Like how it is hot, but sometimes it snows.”

RLS high school students also expressed excitement over helping the area where their vice principal is serving, but spoke in the more somber tones associated with a deeper understanding of the nature of Woods’ deployment.

“We know we’re not all exactly the same, but we should still help them,” junior Marlee Williamson said.

Johnson said the students have assembled 50 packages in bags donated by Cash and Carry of Andalusia, and have decorated each one in preparation for its shipment to Afghanistan.

“They’ve really learned a lot about the country,” Johnson said. “I think they’ve come to appreciate what they have more because of it.”

Johnson said the bags will be shipped to Afghanistan Monday.