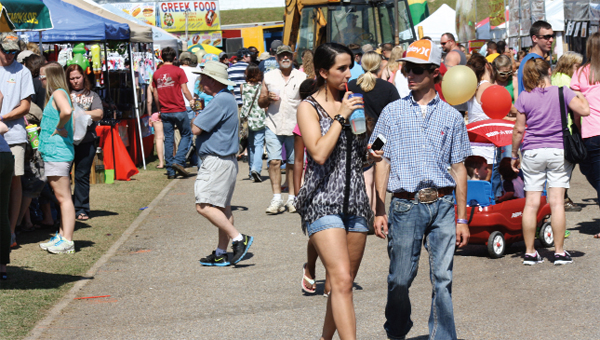 Approximately 8,500 people visited Opp this weekend for the Rattlesnake Rodeo.

“I think it was a success,” Bartholomew said. “There was a great selling for Easton Corbin. People were excited. We had a packed stadium. It was a great day.”

Emilee Gage, director of the Opp and Covington County Area Chamber of Commerce, said it is always fun to watch visitors enjoy the music, food, games and, of course, the Eastern Diamondback rattlesnakes.

“It was great to see people from all over come to Opp and partake in our annual tradition,” Gage said.

And there was plenty to partake in during the two-day festival, as events like the annual “Rattlesnake Race,” the “Greasy Pole Climb” and the “Buck Dance” kept the crowds entertained before Saturday’s performances from acts Easton Corbin. Building 429, Family Force 5 and Hawk Nelson performed on Sunday.

Bartholomew said the events drew such a crowd that the event spilled over into local businesses.

“This is a marketing tool, and not really something we do to make money,” he said. “It’s something that brings people from around our area in to see what our city is all about, but in the process, people buy gas at our stations; they stay in the hotel and they spend money with merchants.”

They also get a chance to worship, Bartholomew said.

“A lot of churches didn’t have services Sunday so they could come to our service Sunday night,” he said. “It was really great.”

Winners from this year’s Rattlesnake Rodeo include: Buck Dancing contest, sponsored by Kelley Foods, 12 and under, Max Nelson; 13 and up, Fred Stacey; 60 and over, Jerry Thorn.

Greasy Pole Climb: 12 and under, Destinee Nelson; 13 and over Kevin Darling.