Opp’s Barney is retiring from biz 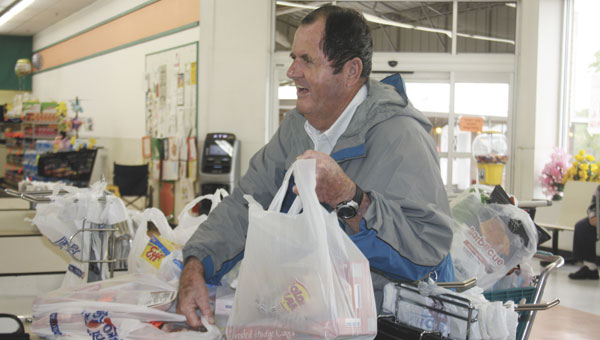 Go through the checkout line at Opp’s IGA grocery store over the next week and you’ll likely hear these six words: “We’re going to miss you, Barney.” They have been repeated by countless Opp residents since the news broke that long-time employee Barney Cotton will bag his last item Wednesday.

Cotton, an Opp native, said he has spent nearly five decades working in the grocery business, dating back to his teens.

“I started going up to the cotton mill looking for a job and I had to take a test,” Cotton recalled. “In the mean time, me and Momma stopped at the Red and White (grocery store). I asked them if they had a job for me. I hadn’t nearly made it home when the phone rang. I was 19.”

And for next 23 years, Cotton said he worked for the grocery store and, “near about did it all.”

“I’ve been bagging groceries here (at IGA) for 22 years,” he added.

Cotton said he likes the bagging aspect of the job the most, primarily because it allows him to

speak to the customers while he works.

“I know most everybody that comes through by name,” Cotton said. “There are a few that I don’t know their name, but I know their face.”

And most people that come through IGA’s lines certainly know Barney Cotton.

After Wednesday, the customers and Cotton alike will have to get used to a new routine.

Cotton said he will be moving on to Milton, Fla., where he will live with his older sister, Betty.

“It wasn’t really my idea to retire,” Cotton said with a grin. “My sister thought it would be better. She’ll probably keep me busy. She said we’ll come back up here once in a while, too.”

So, with a promise to visit, Cotton will call it quits at IGA next week. As for retirement, he says he’ll spend time with his sister and her two daughters, as well as enjoying one of his favorite pastimes – watching the Alabama Crimson Tide play football.