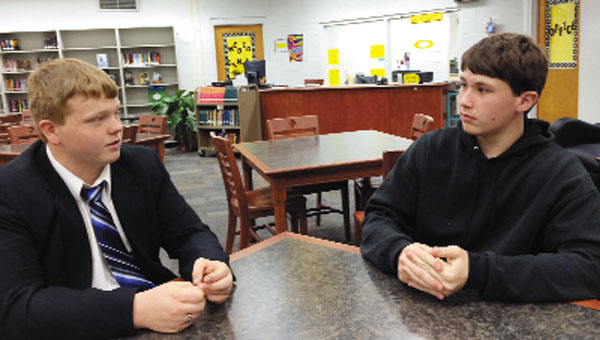 Opp High School’s career coach program is making a difference in the lives of students in the school.

Meet freshman Matthew Parker and sophomore Tyler Lubert, who through the program have been able to explore interests and potential career fields.

Parker said he’s been interested in becoming a radio broadcaster for a while, but Career Coach Polly DuBose helped set him up with WOPP’s Robert Boothe for a job-shadowing day.

“I was ecstatic,” he said. I loved it. All the engineering of it is really interesting.”

“I really think it would be awesome to announce on the radio and make people happy,” he said.

During his day at WOPP, Parker got to be on Boothe’s LA in the Morning Show.

“We talked and gave out some Rattlesnake Rodeo tickets,” he said. “We also played a few songs, and they played a couple of jokes.”

Parker said he plans to attend college to learn the technical side of the business.

“I would like to one day be a world-wide radio announcer,” he said.

For Lubert, the career coach program has helped him discover his love for culinary arts.

DuBose set him up with a tour of the LBWCC culinary arts program, in which he met with Michael Whelan, who is the program’s instructor.

Lubert said he hopes to be able to participate in dual enrollment and take the two-semester culinary arts program.

If he’s accepted, he would be able to complete the first semester of the program in his junior year of high school and the second semester in his senior year.

After that, Lubert would like to earn his bachelor’s and master’s degrees in culinary arts.

Lubert said his love for cooking began when he helped his father at home.

“He’d tell me to make something a certain way and I’d add something extra,” he said.

“(OHS principal) Mr. (Ron) Snell taught me to exceed expectations,” Lubert said. “And to take chances and go until you can’t go anymore.”

“To anyone who wants to have a career, they have to believe in it. Mrs. DuBose is here to help you find a career,” Parker said. “You have your whole high school to figure it out.”

In the meantime, both have a pretty busy schedule.

Both students play football for the Bobcats, they said.

Additionally, Lubert performs as a disc jockey on the side and cuts lawns to make extra cash, and Parker helps on a poultry farm.

Lubert is the son of David Lubert and the late Pam Lubert.

Parker is the son of Tracy Park and Chasity Parker.