Bullodgs’ eyes are on capitol prize 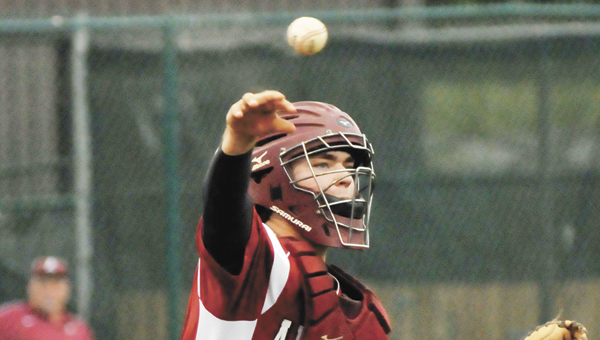 Now that it’s the postseason, Andalusia’s goal to get to Montgomery hasn’t wavered one bit.

AHS will host Clarke County in its first stepping stone to the capitol city today in the first round of the Class 4A state playoffs, where both will play in a best of three series.

“I’m excited about it,” Tyler Dent, Andalusia’s first-year head coach said. “We’ve had a good week of practice. All of the boys have been loose and relaxed. I feel like if we go out there and play loose, then we’ll play good baseball.”

Playing good baseball has been the key for the home team this season as the Bulldogs enter today’s doubleheader 18-9 on the season.

Clarke County is a deceptive 9-16 team who has a couple good pitchers and can hit the ball well.

“I wouldn’t tell anybody to look at their record and say that this is going to be a push over,” Dent said. “That’s definitely not the case. (CC head) Coach (Keith) Kelley does a great job. He’s a very hard-nosed guy. I know he’ll have those boys coached up real well.

“I know the boys will play hard,” the coach said. “We’re going to have to come out and play our best ball.”

The team mindset leading up to the first-round series has solely been on Andalusia, senior third baseman Daniel Henderson said.

Playing together as a unit is crucial, too, Henderson said.

“Playing as a team; making sure we keep it up in the dugout all year long has been huge for us,” the senior said. “We seem to play as high as our emotion is. If we’re up in the dugout, then we’ll play well in the field.”

When asked what’s been done or said to help prepare the players to accomplish their ultimate goal, Henderson said Dent has constantly preached that what happened in the past is in the past.

Weather forecasts indicate that there is a 90 percent chance of rain today, according to the weather service out of Mobile.

Dent said with the help of City of Andalusia Superintendent of Parks and Cemeteries Alan Bracewell, that they’re going to do anything they can to play the games in a timely manner.

“Mr. Bracewell has been working with me as much as he can, which is a great luxury to have,” Dent said. “If it’ll get in here and stop, and get out of here we’ll be able to play.”