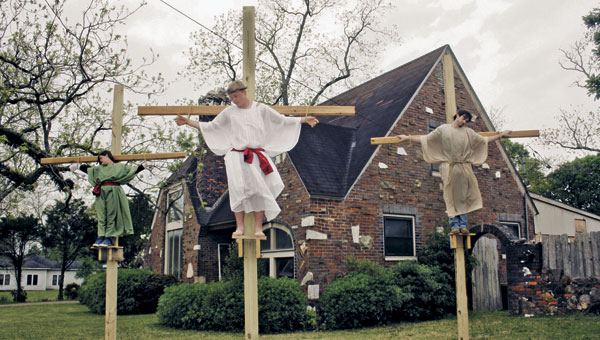 Members of Opp’s First Assembly of God act out a live crucifixion scene in preparation for today’s day of remembrance of Good Friday and of Sunday’s Easter holiday. The scene will continue on Barnes Street today and Saturday from 4 to 5:30 p.m. Pictured are, from left, Aly Johnson, Eli Hattaway and Jacob Forbes. | Blake Bell/Star-News

As Christians around the world prepare to celebrate Easter, a holiday commemorating the most sacred of Christian events – the resurrection of Jesus Christ – local pastors are hoping today’s meaning will not be lost on believers.

“Good Friday is central to who we are as Christians,” Dr. Fred Karthaus, pastor of Andalusia’s First Baptist Church, said. “Jesus Christ made up for our sin. It leads ultimately to our salvation.”

Karthaus said Christmas is often viewed as the biggest holiday in Christianity, but added that even the birth of Jesus is not as central to the religion’s message as his resurrection on Easter morning – an event that would not have occurred without his crucifixion of Good Friday.

“Both (Christmas and Easter) are important, of course,” Karthaus said. “But Christmas loses its significance if we don’t have the cross and the resurrection.”

“When I think about Good Friday, my mind goes immediately to the crucifixion of Jesus,” Hunt said. “There are times in our life when we think we are having a bad day. This, for Jesus, was the best of bad days. His Friday morning began as He was marched out of the city, Via Dolorosa (way of suffering) to the hill Calvary to be nailed to a cross; crucified for me. I take this very personally. He died for me.”

Bob Madsen, pastor at Andalusia’s First Presbyterian Church, offered words of encouragement, he said, he has kept with him through many Good Fridays.

“You can’t get to the empty tomb of Easter without pausing at the horror of Good Friday and contemplating the depths to which God will go to demonstrate His love for creation,” Madsen said. “When we just pass right by that, it doesn’t justly set the stage for celebrating Easter.”

“We live in a death-denying culture, and our religion can even be death denying,” Howard said. “There can be a temptation to rush right through Good Friday or to skip it all together. I think this is very unfortunate; if we yield to this temptation, I fear we miss the point.”

Hunt summed up the importance of Good Friday with a reminder that its events occurred for all people.

“Good Friday was not just a good day, it was a great day for mankind,” Hunt said. “If He would have just died for us it would have been great, but I’m so thankful that He loved us enough to rise again on the third day. He did it all for you and me.”