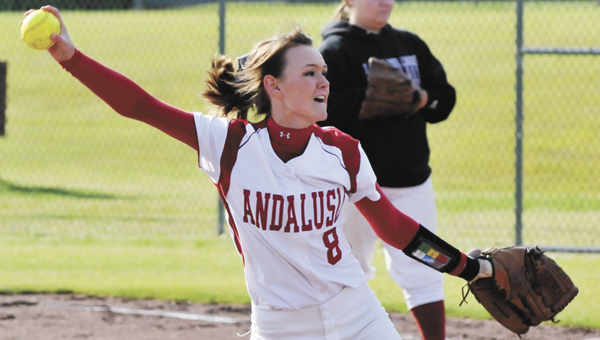 The Lady Bulldogs edged the Lady Eagles 4-3 in their first game, and went on to defeat Florala 2-0 in their night cap to finish pool play 2-0 and as the No. 1 seed out of Pool A going into Saturday’s bracket play.

All of this took place two days after AHS took a 18-4 beat down from PHS at home.

“It was a tale of two teams,” AHS coach Brad Garner said. “We just showed up with a different attitude.”

A big reason why the Lady Bulldogs won two in pool play was the lack of errors. AHS committed three errors total.

“(Thursday), the difference was pitching and defense,” Garner said. “They did things the right way. When they’d make a mistake, they would move on to the next play.”

Breanna Dixon allowed three runs on six hits in five innings to help lead AHS in the win over PHS.

Emily Terry had two diving catches down the line as well.

Andalusia scored two runs each in the first and third innings.

Garner said there was only one incident where the Lady Wildcats hit one hard ball.

Florala’s Lily Ritzel had 11 strikeouts in the loss.

Millie Manring laid down a nice bunt for the second run to come across the plate.

Andalusia visits Hillcrest-Evergreen today in area action if the rain holds off. The Lady Bulldogs need to win tonight to secure a home berth for the area tournament.

Ritzel struck out a season-high 17 batters, walked four and allowed five runs on seven hits in the complete game for the win.

Amber Johnson and Callie Wise went 2-for-5 each to lead FHS in the win over the Lady Gamecocks.

The Lady Wildcats scored four runs in the top of the ninth to break a 2-2 tie.

Prior to going into extra innings, FHS had several chances to take the lead for good.

Pleasant Home and New Brockton were still playing in the final game of pool play last night when The Star-News went to press.