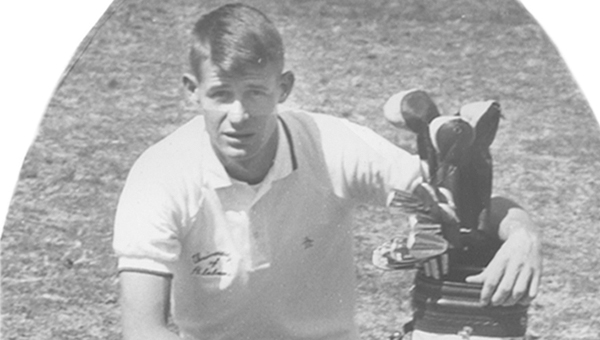 Ab Powell played golf for the University of Alabama in the 1960s and said golfers have changed since then. | Courtesy photo

Local lawyer says golf has changed since his day

Ab Powell watched the University of Alabama win its second straight NCAA Golf National Championship on Thursday and thought about one thing — it sure was different playing for the Tide when he was in college.

Powell, an Andalusia attorney, played at UA from his freshman to his junior year. He was No. 1 on the freshman team, and No. 2 on the varsity squad his sophomore and junior years. Although he had another year of eligibility, he was able to finish his undergraduate classes and enter law school that year.

“I thought they would win,” Powell said of the 2014 Alabama team’s national championship win. “They were pretty much favored, but you still gotta go play. God knows a lot of things can happen to you on a golf course that you didn’t think would happen.”

Alabama won its title Thursday on the back of Trey Mullinax’s eagle from the par-5 17th, defeating Oklahoma State 4-1 in match play at Prairie Dunes in Hutchinson, Kan.

In the early 1960s, Powell recalled, most colleges didn’t offer golf scholarships. Among those that did were the University of Houston, Georgia, Florida and LSU.

A year later, UA started awarding golf scholarships and that one act made a big impact on the team that it was able to put on the course, Powell said.

“The format of college golf was different,” he said. “We played matched against other individual schools including all schools in the (Southeastern Conference). And those matches consisted of six of our players against six of theirs. The format was matched play, which meant that our No. 1 played their No. 1, and our No. 2 played their No. 2.”

Powell was a part of a team that played in tournaments where quite a number of schools out of the Southern Intercollegiate Conference, which included all SEC schools and others from the region with good golf programs.

In an invitational tournament at LSU, Powell played in the stroke play format, which means that a golfer will play another, one on one.

Stroke play enables a golf team to add up its score for its round score. Whoever scores the lowest, wins the round.

This year’s championship tournament was quite different.

“It was a combination of stroke play and match play,” Powell said. “Stroke play eliminated a number of teams.”

Those teams who qualify for the NCAA championship are invited and have to compete in stroke play to advance to the finals. The finals are matches that put five players from each team against each other.

Powell said one thing he thought about when watching the tournament Thursday was that it reminded him of good friend, Ashton Wells, with whom he played on an AHS football state championship team in the 1950s.

“Ashton was a senior and I was a sophomore,” Powell said. “Ashton was the team captain and a great star.

“When (former Andalusia High School football coach) Don Sharpe had those 1976 and 1977 championship teams, we were leaned up there watching practice one day and he turned to me and said, ‘You know Ab, I believe we could beat them guys,’ ” he said.

“Well, there was no way we could have,” Powell said. “They were a lot bigger and stronger than we were.”

And that’s the sentiment he had about the golfers he watched on Thursday. Powell said golfers now are “products over very good instruction by golf instructors from a very early age.”

A golfer’s progression throughout his or her career is quite important, Powell said.

“Golf was a very exclusive sport when I played,” he said. “It’s pretty much inclusive now. That wasn’t the way it was. Arnold Palmer came along in the late 1950s and 1960s along with television, and got the people in the United States who had never been a golf player excited about becoming a golfer.

“It created a tremendous interest where there had been no interest before,” he said.

Now-a-days, Powell doesn’t get out to play golf much anymore, but when he gets a chance to watch the current professionals got at it, he favors Tiger Woods.

Woods, Powell’s favorite player, will not be competing in this year’s U.S. Open because he had to have back surgery recently.

The former No. 1 in golf is currently trying to chase Jack Nicklaus’ major record of 18 wins. Woods has 14 in the bag already.

“Tiger is simply amazing,” he said. “I don’t know if he will even play competitively again and be as good as he was. I hope he will return 100 percent healthy.”

Other Andalusia natives who played golf collegiately are Richard Anthony at LSU, Ralph Matthews at FSU, Bull Tunnell at Sewanee and Kyle Boatright at Troy.

Powell even said Straughn rising senior Brooks Rabren has the talent to play golf at the college level.

“I hope he’ll take a look at Alabama,” he quipped. “He certainly can play college ball if he wants to.”

As an alumnus of UA, Powell wanted to make sure to let the 2014 championship team know that all alumni are proud of them, and “Roll Tide!”