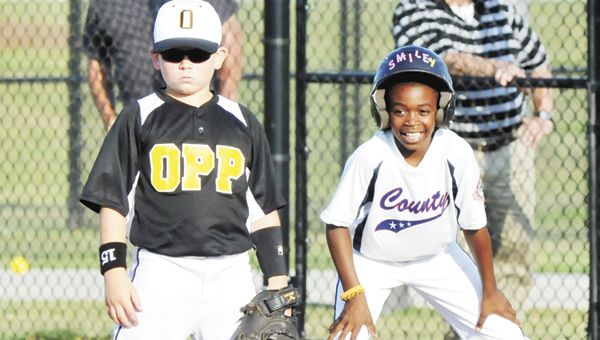 Covington County put some special mojo on its bats in the top of the sixth inning as the local All-Stars scored eight runs to top Opp 14-11 in the first round of the 8U Cal Ripken District Baseball Tournament Thursday night at Johnson Park.

CC trailed 10-6 going into the last inning, where Opp only had to get three outs for the win.

Trevin Garner got the ball rolling for county with an RBI single to cut it to 10-7. Ridge Wilson and Noah Williams followed with back-to-back RBI singles, and Eli Guilford spanked a two-run triple to give his team the go-ahead runs it so desperately needed.

Opp came back in the bottom of the frame to put runners on with two outs, and managed to score a run on a much-needed hit.

It was a tight ball game throughout that saw the lead change a few times between two equally-matched teams.

Opp’s Andrew Danford hit an RBI single to break a 6-6 tie in the bottom of the fifth, and John Gohagan hit a three-run double to bring the Bobcats ahead 10-6.

In other 8U action, Andalusia fell to a good-hitting Brewton team, 21-3.

Thomas Lowery went 3-for-3; and John Wesley Sessions went 2-for-3 with two doubles; and Jim Daugherty and Craig Blevins had a home run each for Brewton.

Andalusia’s Brunson Wilson and Clark Gay went 2-for-2 each to lead the Bulldogs.

Andalusia and Opp play separate games at 4 p.m. on Saturday, while Brewton plays Evergreen at 6 tonight.

READY TO COMPETE: Andy 8U preps for state tournament

GETTING READY FOR STATE: Andy 8U wins pair warm-up games before tourney