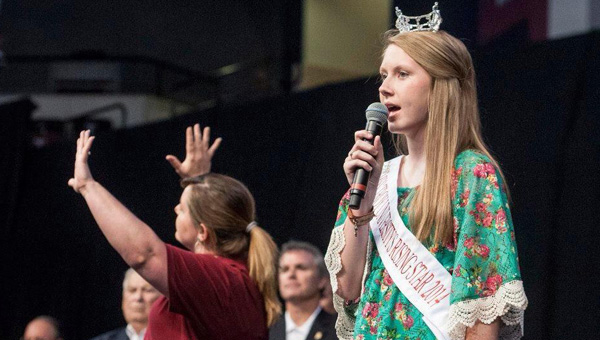 Ella Kate Nichols sings the national anthem, which is then translated into sign language, at the Special Olympics in Troy.

A local student raising money for cancer treatment will be doing so on a much bigger stage Friday when she performs before a crowd of thousands in Atlanta.

Ella Kate’s mom, Amy, said her daughter has been raising money for cancer research for years, which led her to become involved with the Rally Foundation in Atlanta.

“The Rally Foundation is based out of Atlanta and has a wonderful relationship with the Atlanta Braves,” Amy said. “This year, pitcher Kris Medlen is the official spokesperson for Rally.”

“We learned of Rally Foundation through a chance meeting with a little girl, Tori Svenson, two years ago at Princess Camp in Orlando,” Amy said. “She was a participant with Ella Kate and they spent a week together. Tori had just completed her chemotherapy for medulloblastoma, a form of brain cancer. Tori is now cancer free, although she is battling the severe side effects from the treatments used to save her life. She will be at the game Friday and Ella Kate is super excited.”

Amy said Ella Kate sold 265 tickets to Friday’s game, which equals $2,030 in fundraising. She went on to raise an additional $473 in Rally T-shirts to wear during the game.

“With Rally Foundation, 92 cents of every dollar donated to them goes directly to fund childhood cancer research,” Amy said. “The tickets that were allotted for the fundraiser have been sold; however, tickets to the game are still available at the gate or online at Braves.com.”

Ella Kate herself said she is thankful she is able to help fight cancer using any and all of the tools at her disposal.

“I am so excited about singing the national anthem at the Braves game,” Ella Kate said. “I love to sing, and I’m so glad that I can use my voice and help Rally at the same time. I have had three good friends to fight cancer. I am thankful for Rally and what they do for kids with cancer.”

Amy said both Rally Foundation and the Braves organization go above and beyond the call of duty, as it relates to helping children.

“Rally Kids are often taken onto the field during batting practice and seeing the players with the kids is something that you don’t soon forget,” she said. “Once you see the big hearts that some of the players have, you don’t just see what they can do on a baseball field; you see how they can touch lives with a simple hug or high five.”

Amy said any child that has, or has had, and form of cancer can become a “Rally kid.”

“All they have to do is sign up online at rallyfoundation.org,” she said.

Ella Kate is the 11-year-old daughter of Todd and Amy Nichols. She will be in the sixth grade at Andalusia Elementary this fall.