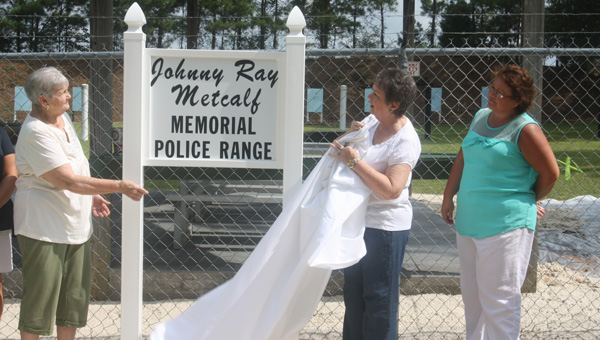 During a dedication service Tuesday morning, those who knew Metcalf best said he is a lamented figure.

“He loved this city; he loved the people in it,” said Metcalf’s wife of 41 years, Pauline Metcalf. “(The firing range) really meant a lot to him. He loved it out here. He was a good man; a good husband; a good friend.”

Current Chief of Police Mike McDonald said he was hired during Metcalf’s tenure, adding he learned about both law enforcement and life in general from the late police chief.

“Not only was he our chief of police, I can truly say he was my friend,” McDonald said. “If you didn’t know Johnny Ray, you missed a treasure.”

“People as me why the police range,” Kyser said. “After he hired me, he sent me to firearms school. We didn’t really have a good range here then. So, we started this, and he’d rather be out here any day than sitting in his office.”

Kyser said the time at the range was as much about bonding as a police force as it was learning about firearms – something he said Metcalf was aware of.

“Every time we used the range, we would always cook for our officers,” he said. “And he was always here. He spent a lot of time, blood and sweat on this.”

“I know he’s looking down on us today,” Pauline added.

An Opp man is back in jail on a bond of more than $2 million after being indicted by a... read more