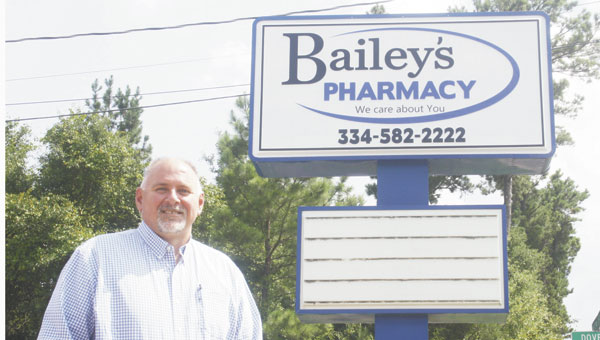 When it comes to pharmacy needs in Andalusia, there are some new faces in town – kind of.

Pharmacist Jeff Bailey said he has been serving Andalusia residents for more than a decade, but on Tuesday, he and wife Robin became official pharmacy owners when Bailey’s Pharmacy opened its doors to the public.

“I was employed as a pharmacist at Pharm-a-Care for almost nine years,” Bailey said. “But, after they were bought, Robin and I just decided to open our own store.”

Bailey said the couple purchased their new building on the Western Bypass in mid-March and has been working tirelessly since with this week’s opening day in mind.

Bailey said both he and his wife grew up in the Andalusia area and graduated from Straughn High School. Bailey himself later graduated from Auburn University and said serving his hometown community is as good as it gets.

“”We’ve got a lot of good people (on staff),” he said. “Most of us came over from Pharm-a-Care. It’s a new store, but most all of us have quite a few years of experience.”

Bailey said, aside from himself and Robin, the store employs five people, including fellow pharmacist Kathy Jones, who also graduated from Auburn University.

Bailey said a good staff is the first step toward the ultimate goal of great service for each and every customer.

“We just want an opportunity to take care of people and treat them like family,” Bailey said. “We also want to fill your prescriptions accurately and quickly. We’d love for you to sit around and talk with us, but we don’t want you to have to.”

“We just want the opportunity to serve people,” he said.

Bailey’s is located on the Western Bypass, across the street from Andalusia Tire Co.