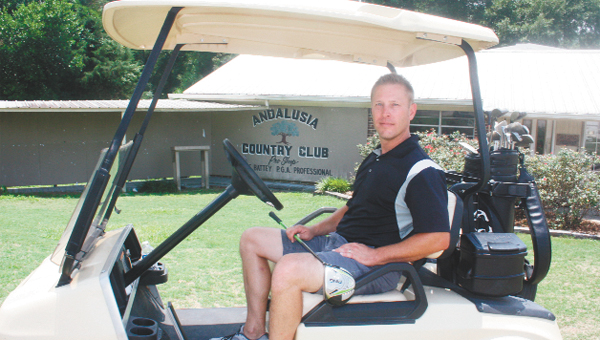 Jeff Mullins is general manager at the Andalusia Country Club.

It has now been almost four months since new General Manager Jeffery Mullins took over at Andalusia Country Club, and he says a recent milestone is proof his staff is already making a positive difference for members.

“We like to really put the focus on the food here,” Mullins said, adding that is just one reason why a recent food score of 94 was a big deal for both his staff, as well as for those who frequent the club. “The score is up from 90 back in January or February. It’s significant for the obvious reasons; no one wants to eat in a dirty restaurant. But, it’s also significant because this is a pretty old building, and to achieve a 94 in a building built in the 1960s just shows the dedication and discipline of our staff. It shows the level of dedication my chef and I have to this place.”

Mullins, who says his history in restaurants goes back to his teenage years, added that the culinary success at the country club is still only one aspect of the many things his staff is working to improve upon.

“It kind of all starts with the food for me,” Mullins said. “I’ve been doing this since I was 15. Both of my grandmothers owned restaurants.”
It is because of his culinary history, Mullins said, that improvements at the country club have begun in the kitchen and spread throughout the rest of the facilities.

“Everything here is scratch-made,” he said of the food. “That was the first change I made. We eliminated all this frozen, pre-made food. All of our fish comes from the Gulf. I actually get a call every Thursday telling me what is coming in on the boats. So, our catch of the day really is fresh.”

But, unlike restaurants he has managed in the past, Mullins said the fact that the country club offers much more than just food gives him a chance to branch out as both a restaurant manager and a general leader.

Mullins said, in addition to his staff of five in the kitchen, there are another 15-or-so employees working in the pro shop, serving food and drinks or working as lifeguards. He said those staff members are dedicated to making each aspect of the country club as good as it can be. But for Mullins, it all begins in the kitchen.
“I say this humbly, but I think this has to put us at the top of food rankings in Andalusia,” he said. “If you enjoy dining out, this is a great place to come.”

But, it isn’t just the food Mullins said makes the country club worth joining.

“We have one of the best privately owned (golf) courses in Alabama,” he said. “You can play at your leisure for no additional cost. We have a darn-near Olympic-sized pool. We have professional tennis courts. When you compare that with what you would pay for at your average (YMCA), it is actually cheaper.”

And Mullins said possibly the best aspect of the country club is the environment members have access to.

“It’s a great family environment,” he said. “If parents need to stay at work during the school year, it’s a place kids can stay a while and parents know they are safe on this property.”

Currently, Mullins said the country club has approximately 300 members, but added that anyone interested in joining may contact himself or Laura Howard at 334-222-3881 for rates and more information.

Mullins and head chef Derrick Burgens will also be on hand Wednesday to cook for this week’s chamber breakfast at the Andalusia Area Chamber of Commerce. Mullins said the food will be served by 7:30 a.m. For more information about the chamber breakfast, call 334-222-2030.

While a major roadblock in a local woman’s road to recovery from cancer has been overcome this week, family members... read more