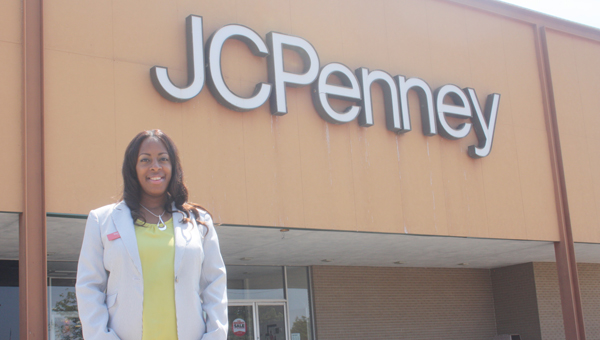 Tameka Belcher is the general manager at Andalusia’s JC Penney.

There’s a new face at Andalusia’s JCPenney location and she says she will soon be spending time getting to know the people of her new town.

Tameka Belcher has been named as the new general manager at JCPenney and she says she is already feeling at home in her new location.

“I’ve been here since July 12 doing different things,” Blecher said. “I came down here and everyone is just so nice.”

Belcher takes over at JCPenney after more than a decade in the retail business, with nine of those years served with Target stores in Georgia.

“I moved here from Covington, Ga.,” she said. “I was with Target almost 10 years before I was recruited by JCPenney. I was just told that it was a great company and I’d fit in well. JC Penney is on the rise.”

Belcher said she also spent a year and half as the general manager of a Title Max location, but has experience in retail dating back to her high school years.

“Retail is my background, but I love management,” she said. “I am very people-oriented. I just love people.”

And Belcher said it is because of her love for people that she plans to be out and about in the community over the next few weeks getting to know the residents of the Andalusia area. In the mean time, she is hoping the people of Andalusia will come see her.

“I want everyone to come by and see me,” she said. “I want to know my customers’ names. Me and my team should be like a family and the same is true with the customers. So, I’ll be here. You never know, you may come in and I may be on a register.”

Belcher said she is also looking forward to the Aug. 17 celebration of JC Penney’s 75th year in Andalusia.

“We’re going to have door prizes every hour and it’s just going to be a great way for me to get involved with the community,” she said.

Belcher is the mother two young girls, ages 8 and 3. She is a native of Covington, Ga.