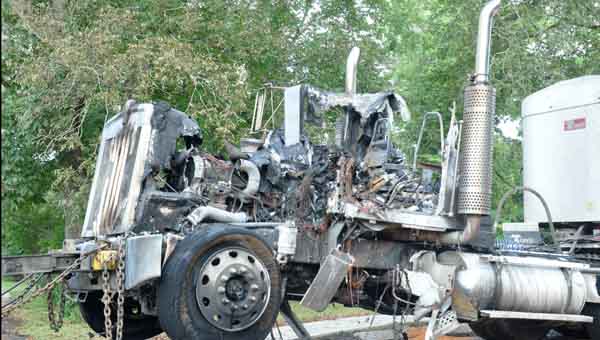 The 1999 Kenworth truck exploded within seconds of the driver escaping the vehicle, said Harry Driggers, chief of the Brantley Fire Department.

Shortly thereafter, flames erupted between the hood and the windshield. He stopped the truck and jumped out, fleeing the truck without injury.

The highway was closed for more than an hour after the incident.

It was only the fifth truck Godwin Materials had ever lost to a fire. The fourth one caught fire Thursday morning near Birmingham.

“We’ve had three in the past 40 years and today we have two,” said Jerry Godwin, owner of Godwin Materials. “Nobody got a scratch. That’s all that counts. We can replace the trucks.”

The morning incident happened in Jefferson County, according to  Averett.

Kenny Braswell, a resident of Crenshaw County, was driving in the Birmingham area when a fire erupted under the hood of the 18-wheeler.

Godwin Materials owns the 2007 Peterbilt, said Godwin. The Kenworth truck was a leased one.

The cause of either incident has not been determined.

Godwin suspected the oil or brake fuel line was the culprit.

Godwin surveyed what was left of the Kenworth after the evening explosion.

He estimated the total value of the trucks at $100,000 and said the U.S. 331 explosion was far worse than the one in Birmingham.

“The other one looks like a sunburn compared to this,” he said. “But both are totaled.”