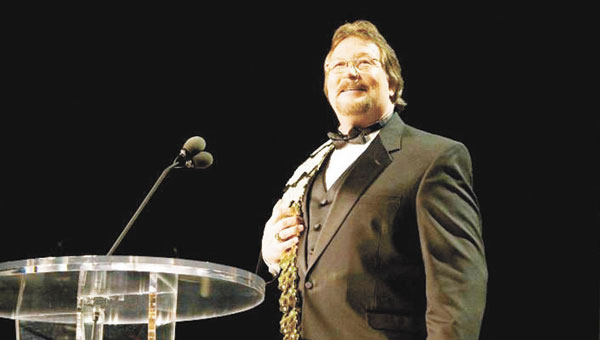 A group hoping to get more men to church has planned an unorthodox approach.

“We know that if we get the father, we have a 95 percent chance of reaching the rest of the family,” he said.

The group plans to use the old Stanley School on Hwy. 55.

“It’s a really cool place,” he said. “Most people my age, you say ‘Stanley School’ and they used to play basketball there.”

The site was chosen because it was a neutral location, which they thought would appeal to those hesitant to choose a church. And then they added a hook.

“We’ll cook you a free steak dinner if you come,” Jackson said.

And they’ve also added another hook – a line-up of interesting speakers that appeal to a good cross-section of men, beginning with the World Wrestling Federations’ Million Dollar Man, Ted DiBiase, who’ll speak at the first event, set for Thurs., Oct. 16, at 6 p.m.

Jackson said organizers are spreading the word through churches, word of mouth, speaking to civic groups, and passing out business cards promoting the event.

“We’re looking for men, who’ll be like a guide,” Jackson said. “A lot of people who hope to get there have other problems, too. We want men who will take a man in his 20s or 30s, and come along beside him, someone who will basically father them for a while.

“We need six or eight men to do that,” he said.

The church, he said, will play a role on both sides, encouraging people to participate, and then hopefully, getting participants to their services.

The events are set for the third Thursday night of each month, through April. No registration is required, but organizers hope the two “hooks,” – steak and an interesting speaker – will draw a large crowd.