This dog helps, without special training 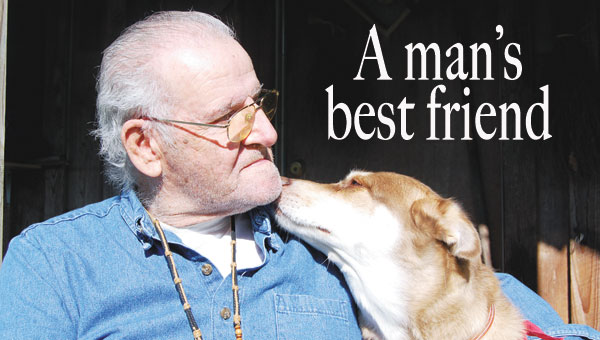 Finding a young pup on the side of the road some nine years ago turned out to be a lifesaver for Covington County’s Charles McAuley.

McAuley said he served three-and-a-half years in the U.S. Navy, where he spent time in the Mediterranean on mission.

He was discharged from the military for post-traumatic stress disorder.

PTSD is a mental health condition that’s triggered by a terrifying event – either experiencing it or witnessing it, according to the Mayo Clinic.

Symptoms may include flashbacks, nightmares and severe anxiety, as well as uncontrollable thoughts about the event, the website said.

These symptoms are usually grouped into four types: intrusive memories, avoidance, negative changes in thinking and mood or changes in emotional reactions.

“I wanted to make a career out of the Navy,” he said. “But I was discharged due to the PTSD.”

McAuley said he spent six years training guard dogs in Brooklyn, N.Y., before coming to Atmore to work at the prison.

His PTSD caused him to lose his job at the prison, and he received 100 percent VA disability, he said.

McAuley said his dog, Lady, has changed his life.

“When my wife died nine years ago, I was suicidal,” he said. “But Lady kept me going since my wife died.”

McAuley said Lady has no training to deal with PTSD.

McAuley takes Lady with him everywhere, and he says he can’t be without her.

“She watches out for me,” he said. “I started noticing it after my wife died.”

McAuley said he has gone from being hospitalized in Pensacola, Fla., three or four times a year to zero.

Last week, The Star-News reported on a program which trains dogs to support those who suffer from PTSD. McAuley said he wanted people to know that dogs are great companions and can help even without formal training.