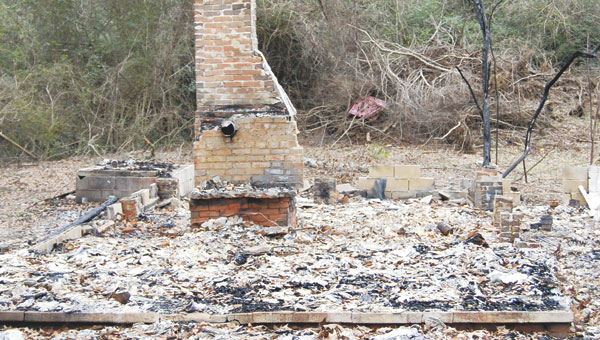 Officials in Red Level have been busy ridding the town of abandoned, rundown homes and major residential overgrowth.

There are more than 15 properties currently being abated by the town, and Mayor Willie J. Hendrix and many contractors were hard at work Wednesday to clear the lots.

“This is all about the properties being a safety or fire hazard, and being an eyesore to the community,” Hendrix said. “We’re trying to clean it up because we want businesses to come in here.”

Hendrix said he is working to get a few new businesses for the town, possibly including a gas station, but overgrown and dilapidated buildings are giving the wrong impression.

“We want to give them a positive outlook on things, and not advertise a bunch of the wrong kind of people live here,” Hendrix said. “In most instances, the property owners don’t live in the area, they just own property and don’t care for it.”

Hendrix said many of the properties were purchased during tax sales, and those who own them have never seen the property.

“They buy these properties up and in some instances they don’t even know where the property is located,” Hendrix said. “They don’t know what they’re buying, they’re just getting it at such a low price, and they’re just buying.”

One out-of-town woman purchased a property she believed to be a building on the main street of Red Level, but when notified of the abatement, found that the property was located in a residential neighborhood.

Individuals who grew up in some of the houses have since moved away and let the homes fall apart, or the yards become overgrown.

“In most instances, the property owners don’t live in the area, they just own property and don’t care for it,” Hendrix said.

Some owners in Florida, Ohio and as far away as New York, he said.

One home was owned by people from Georgia, and they wanted to keep the location, as they had grown up there. The house was nothing but a frame and roof, Hendrix said.

“The house is so old that the wood is like fat lighter,” Hendrix said. “One spark and that place would have gone up and possibly caused a fire at the home less than 30 feet from it. It was a fire hazard.”

The home has since been demolished.

The cleanup has been an ongoing battle for the town, and Hendrix said many of the property owners were notified in 2013, but have not responded.

“There are several properties, three in particular, that we’ve been working on since December 2013 and we’re not getting a lot of response back,” Hendrix said. “When the council is presented with the properties, our attorney will send out a certified letter to the property owners and they have 30 days to respond. Once the 30 days is expired, and no contact is made, we move to the next step.

“When all the cleanup, construction or demolish is done, the city assesses the cost and sends the property owner a new letter to argue any cost within 30 days,” he said. “If no argument has been made, they have 45 days to reimburse the city for all the costs or a lien is put towards the property taxes.”

Town Clerk Tonya Cook said the council is working very closely with the owners of the locations being abated.

“With all of them, we always go above and beyond with giving extra time or anything they need,” Cook said. “We’re making positive changes in our community, and I believe this is just the start of it.”

The Red Level Volunteer Fire Department, as an inexpensive way to demolish the buildings, has burned down multiple houses.

“There’s been three properties that the houses were beyond repair and the cheapest way to do about it was by burning it,” Hendrix said. “One house that was old and falling in, the property owner requested that the volunteer fire department burn the house down. It was a lot cheaper to burn the house, rather than bring in containers and a contractor to tear it down and haul it away.”

In order for the town to remove the buildings by fire, property owners have to send in a certified and notarized letter requesting the location be burned.

“It’s not like we’re just going in there and burning these properties,” Hendrix said. “There’s some people that think that’s what we’re doing and it’s not.”

The owners of one of the burned homes sold the property to neighbors, and they plan to finish clearing the property and put a trailer on it.

“Maybe it’s the domino effect, one good thing and it keeps coming,” Hendrix said. “We don’t want it to continue bringing the looks of our town down.”