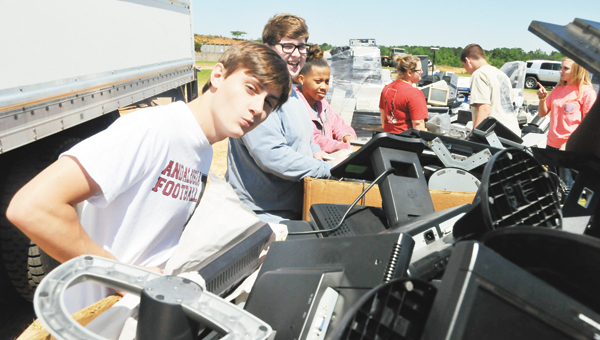 Four years ago, more than 12,000 pounds of unused electronics were recycled during Andalusia’s Electronic Recycling event.

This year, that total may be surpassed, Janet Wofford, facilitator with the Alabama Clean Water Partnership and event organizer, said.

Wofford said people were lined up before 8 Friday morning to give away their electronics, where Andalusia High School Key Club members were waiting to help unload and organize.

Old computers, TVs, printers, slushy machines, monitors and other items were scattered on a small parcel of land at the City of Andalusia’s Recycling Plant.

Wofford said she’ll find out the total weight next week.

Wofford said the city has been gracious in providing the property at the plant, fork lifts and employees.

“They’ve been very helpful,” she said.

Wofford said the event keeps getting better each year, and wishes they could put it on twice a year.