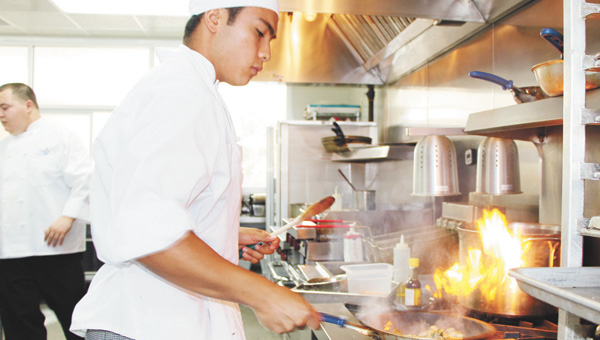 Sammy Tang, a Colombia native, who will graduate from LBWCC tomorrow after completing a 10-month program in culinary arts. | Courtesy photo

Sammy Tang’s face lights up when he talks about what he’s going to do the rest of his life.

The Bogota, Colombia, native, who is an aspiring chef and restauranteur, just completed the 10-month culinary arts program at LBWCC and will go through graduation ceremonies tomorrow night at the Kiwanis Building.

Tang is one of LBWCC’s few international students.

Ever since he was a little boy, Tang said he’s always wanted to cook.

“Instead of asking for cars, I asked for a toy kitchen,” he said. “When I was a small kid, I used to help my grandmother (Sara Tang). At that time, I didn’t realize that’s what I was going to do.”

It wasn’t until he was 10 years old when he figured out that cooking was his thing.

“I started working at restaurants when I was 13 years old,” Tang said.

Tang was so good at cooking while a teenager, that he won a national culinary competition in Bogota working as a sous chef.

Much of his influence in cooking has come from family, namely his grandfather, Louis Tang, who is from China.

“We have a lot of Asian friends in Colombia,” Tang said. “My mother (Siul Tang) has a co-worker who is Korean. We always go to Korean restaurants.”

Tang even worked in a Korean restaurant with a friend of his family’s, where he cooked Asian, Latin and southern cuisine.

Tang, who is living with his aunt and uncle — Maria and Bill Thigpen — said he comes to Andalusia for Christmas and delights in the many Southern food offerings.

“I like everything,” he said about the comfort food. “From basic sausage, cane syrup, collard greens; everything. I just love Southern food.”

One part about Southern food stands above the rest for Tang — barbecue. He said he wants to bring barbecue back to Colombia, where he’ll be studying gastronomy this fall at the University of La Sabana on scholarship.

“I love barbecue,” he said. “In about one year, I want to open a barbecue food truck in Colombia. That’ll be the beginning.”

Tang said he wants to open a barbecue truck for two reasons.

“First, I want to learn how the business works,” he said. “How to invest money, what to do and what not to do. The second one is because in Colombia, right now, American food is growing.”

Even though the South American country has a lot of American staples like Pizza Hut, Subway, Johnny Rockets and Starbucks, Tang said his native country doesn’t know barbecue.

“They think you put the ribs in the oven and put barbecue sauce on it,” he said. “If you don’t smoke it, you won’t have the same thing. That’s what I want to do.”

Tang’s dream is to eventually own and run a fine dining restaurant in Colombia, and through that, he hopes to bring his unique identity of cooking to his country, just like Emeril Lagasse did with Cajun cuisine.

“Emeril Lagasse brought Cajun food to a higher level,” Tang said. “You have shrimp and grits, and crawfish etoufee. He does a lot of that and puts it into a five-star restaurant. That’s what I want to do.”

But before he can do this, Tang said one must learn and then break the rules.

Going through LBWCC’s culinary arts program was a good first step because it taught him the basics, he said.

“It helped me a lot,” Tang said. “I took a class at Springdale three years ago. It was a baking class, or a community education class. I liked it and I decided to come here.

“It helps you a lot because here they give you the basics,” he said. “You need to start with the basics.”

“You can express yourself with cooking,” he said. “Like a painting, you can paint a plate. You can create art when you’re cooking.”

On Saturday, Tang leaves with his mother for a trip to Europe, where he’ll be visiting Barcelona, Spain; Paris, France; Rome and Venice, Italy; and small towns in Germany.