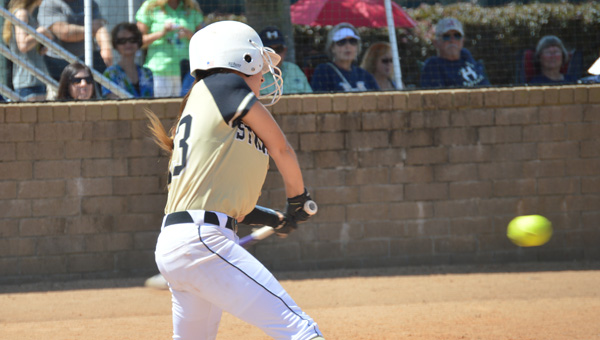 GULF SHORES — Straughn extended their season with a 7-5 win over area-rival Headland, but fell 10-3 in an elimination game against LAMP Friday in the AHSAA South Regional in Gulf Shores.

The loss to LAMP ended the Lady Tigers’ season.

The win against the Lady Rams marked the first time this season that SHS has been able to take down Headland, after losing four times this season.

Headland took the lead in the bottom of the first inning when Lauren Buchan hammered a home run to left field.

In the top of the third, Paige Taylor led off with a walk, and scored on a two-out triple from the speedster Katelyn Kinsaul.

Kinsaul gave the Lady Tigers the lead a few pitches later when she scored on a passed ball.

The Lady Rams tied the game 2-2 in the bottom of the fifth inning, but the Lady Tigers wouldn’t let it remain that way for long.

Kinsaul lead off the top of the sixth with a double, and then scored to take the lead when the Lady Ram’s first baseman couldn’t hold on to a throw from the pitcher.

Brentley Armstrong followed with a perfect bunt down the first base line, and later come around to score on a two-RBI single from Taylor that put the Lady Tigers up 6-2.

Taylor scored on an error to put the Lady Tigers up 7-2.

The Lady Rams put together a few runs in the bottom of the sixth, when Jaycie Walker drove in two-runs with a triple.

Headland got one more run, but it wasn’t enough to hold off the upset-minded Lady Tigers.

In the elimination game, the Tigers two RBIs from Kristen Peavey and Dee Gantt scored on a four-base error by the LAMP left fielder.

Kinsaul drove in two runs in the bottom of the seventh.

Straughn falls to LAMP in 1st round Thursday