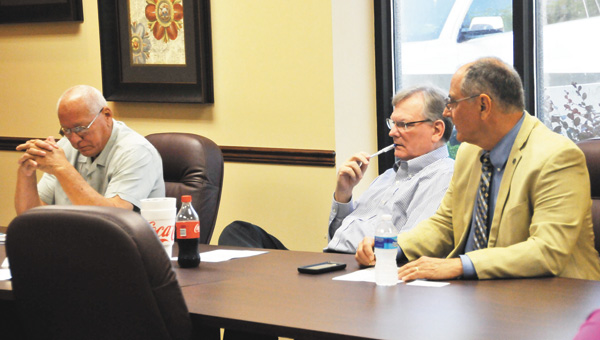 The South Alabama Regional Airport Authority, along with officials from the City of Andalusia, City of Opp and the Covington County Commission, agreed Friday to present Vector Aerospace a new, long-term lease agreement, which they hope will help keep the industry and jobs inside of the county.

The company has requested a written offer for a new lease agreement before the close of business on May 12.

SARA officials said they have learned in recent meetings with Vector that the aerospace company believes that, because of military cuts, they will not have as much work at the location as in previous years. At present, the company employs 121 people in Andalusia, 41.9 percent of whom are local residents, SARA co-manager Jed Blackwell said.

The governing bodies of Opp, Andalusia and Covington County have a vested interest because they secured the construction bonds, and are responsible if the Airport Authority cannot make the payments. At present, they are in the midst of refinancing the airport bond issues and talking sole responsibility for those debts.

On the table Friday were two options, each of which would give Vector multi-year leases beginning on Oct. 1, 2016.

Reporters were asked to leave the room during the discussion.

“After a long discussion, the governmental entities and the airport authority board have agreed to work with Vector to keep them in the airport, and keep them on a long-term lease,” SARA Airport Authority Board Chairman Gary Smith said.

The proposal will be submitted to Paul Cockell, who is the president of helicopter services for Vector in North America.

Cockell will then present the agreement to company executives, who they will make a decision on June 15, 2015.

Airport authority officials asked that final details of the agreement not be released to the public until the agreement is sent to Vector on May 12.

Johnson said he was quite pleased with the outcome of the discussion.

“I am excited and uplifted by what happened here today, and the prospect that it holds for Vector remaining in our airport for an additional time,” Johnson said.

Godwin said he’s just glad that they can move forward.

“We deserve the jobs we have here,” he said.

In unrelated business, the authority approved a proposed agreement to lease the twin hangar complex for six months at $25,000 per month.

Bang to appeal Opp case to circuit A Covington County pediatrician said he plans to appeal a conviction in Opp... read more