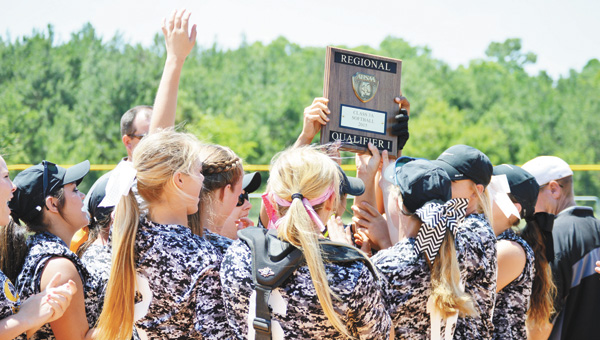 The Opp Lady Bobcats finished as the top qualifier from the Class 3A South Regional Friday. | Josh Dutton/Star-News

GULF SHORES — It has been since 2001 that the Opp Lady Bobcats have made a trip to the state tournament, but after downing Slocomb 4-1 in the South Regional in Gulf Shores, they will get a chance to do just that.

“We have been working and waiting on this for a while,” Bobcats’ head coach Jimmy Reeves said. “I’m very proud of and happy for these seniors. For them to get to experience the state tournament, it will be special deal for them. Slocomb is a great team. The key for us today was that we just kept pressure on them, and our pitchers were outstanding again.”

The Lady Bobcats broke onto the scoreboard first in the top of the second inning when Katlynn Schively drove in a run on a fielder’s choice.

Slocomb scratched back, and tied the game 1-1 in the bottom of the second with a run scoring hit.

The run by Slocomb was the only run allowed by the Lady Bobcats this postseason.

In the top of the fifth, the Lady Bobcats added to their lead when Courtney Chatham drove in Tori Reisnour.

Loryn Prater stepped in a few batters later, and ripped a double into the gap that allowed Chatham and Anna Harrelson to come around to score.