Buckelew’s hanging up his whistle after 31 years 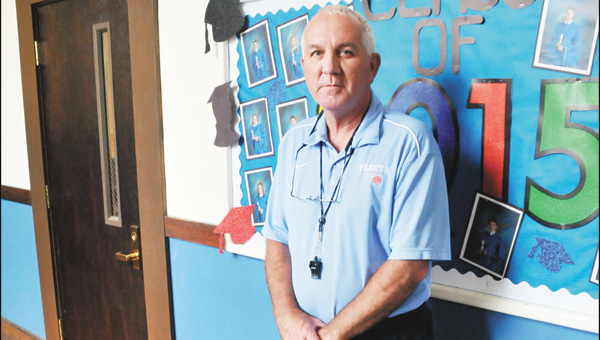 When the halls clear for the summer at Fleeta Junior High, Mike Buckelew will retire from coaching and teaching. | Andrew Garner
/Star-News

Mike Buckelew may be hanging up his whistle, but don’t count on him not putting in a good day’s work during his retirement from coaching and teaching.

For the past 31 years, Buckelew has mainly been teaching social studies and physical education to junior high students at Straughn, Elba and Fleeta.

What made his decision easy to not teach anymore was that his time on DROP (Deferred Retirement Option Program) was up.

“After five years, you can’t continue to keep working,” he said. “Your insurance will go up and that was the deciding factor for me. Plus, I’ve been doing it long enough that I’m ready to do something else. I’m not going to retire-retire. God has blessed me, but it’s time to do something else.”

The DROP program allows teachers who are retired to keep drawing their retirement money into an account, which accrues interest. Additionally, it allows teachers to draw salary.

The program only gives teachers three to five years.

Buckelew said he reached the max number of years he could be on the program.

Baseball seemed to come to him the easiest because it’s the one that he enjoys the most.

When he’s not teaching, you can see Buckelew in an umpire’s outfit calling games during the spring.

“I know more about baseball,” he said. “That’s really what I coached the longest. I was the varsity coach at Straughn for 21 years and at Elba for two years. My expertise is in baseball.”

Buckelew said the most rewarding aspect of his job was the interaction with the kids.

“My two sons (Brandon and Britt) said we can’t go anywhere without running into former students of mine,” he said. “That’s a high honor when you see ex-students and they want to hug your neck. I’ve always loved to work with young people. God has blessed me.”

As a high school coach, Buckelew finished with a 357-105 record.

Buckelew said he was proud of the Fleeta Junior High baseball team’s achievements after winning the county championship, while being the smallest school to compete.

When asked what he’s going to do in his retirement from teaching, Buckelew said he’s aiming to get a part time job.

“My oldest son is at Auburn as a freshman,” he said. “My youngest is still a junior in high school. I can’t afford to retire-retire. I wouldn’t want to anyway.

“I know that God’s got something else for me out there,” he said. “I’ve just got to find what that is.”

Buckelew is married to Wanda, who is a teacher at McKenzie School. Brandon is a freshman at Auburn, and Britt is a junior at Opp High School.