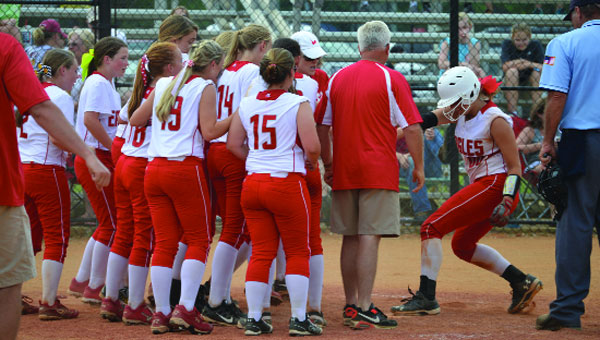 MONTGOMERY — Pleasant Home will resume its third game of the AHSAA Class 1A State tournament at 8 this morning, thanks to rain and lightning delays.

The Lady Eagles were trailing Isabella, but had closed the gap to 7-5 at the bottom of the fifth when the game was called.

With a win, they advance in the tourney. A loss will bring them home.

After dropping the opening game of the state tournament, the Pleasant Home Lady Eagles rebounded with a walk-off 3-2 win to eliminate the South Lamar Lady Stallions.

Trailing 2-0 heading into the final inning, the Lady Eagles bowed up and decided they weren’t going to lose.

Tammi Hilson led off the bottom of the seventh inning, but was retired on a strikeout.

Senior Jade Self stepped in and punched an opposite field single to give the Lady Eagles some life.

Anna Bulger then came up representing the tying run, and belted a pitch to left field with just enough muster on it to clear the fence.

The Pleasant Home faithful rose to their feet as the ball sailed over the fence to tie to game up.

“I didn’t think it was going over,” Bulger said. “It really didn’t feel like I hit it that hard.”

As soon as it left the bat, the crowd erupted as there was no doubt the ball had the distance.

Godwin rounded the bases as the winning run, and was mobbed at the plate by her excited and emotional teammates.

When asked about the last inning heroics, Lady Eagles’ head coach Jessica Gibson said, “It all started with Jade (Self). We have been working all year on going with pitches, and she just threw her hands out there and went the other way with it to get us started. Then Anna (Bulger) comes out there and ties it up with a home run. That was great. Praise God that she hit that out. After that, Cassidy (Godwin) comes up, and we had been talking about the confidence that we as a team have in her. She didn’t let us down.”

While the most exciting moment was the home run to win, there were still plenty of key moments that helped the Lady Eagles get to that point.

“All the little things added up for us,” Gibson said. “Taylor McGhee pitched a great game. We couldn’t be more excited than we are right now.”

The Lady Eagles had a tough start in game one of AHSAA Class 1A State tournament, as they fell 7-0 to Athens Bible in the first round Thursday in Montgomery.

Tiffany Knoll took the mound for the Lady Eagles, and got a quick out to Carson Fielder before April Hagewood and Emma Jarrett each reached on singles.

Knoll struck out Davidson for the second out, and then the Lady Trojans’ bats got hot.

ReAnna McCormack drove in the first two runs of the ball game with a two-out, two-run double in the bottom of the first.

A base hit from Lauren Marshall put the Lady Trojans up 3-0, and a bases-loaded walk gave them an early 4-0 lead.

Davidson sat the Lady Eagles down in order, until Tammi Hilson lead off the top of the fourth with single for the Lady Eagles’ first hit of the game.

Knoll began to settle into the game after the shakey first inning, and kept the Lady Trojans off the scoreboard from the second inning until two-outs in the bottom of the sixth.

Davidson drove in two runs with a two-out double in the bottom of the sixth, and Guthrie drove in Davidson for the final run of the game.

Paige Johnson bats for the Lady Bobcats. The Opp Lady Bobcats didn’t quite have the kind of state tournament that... read more