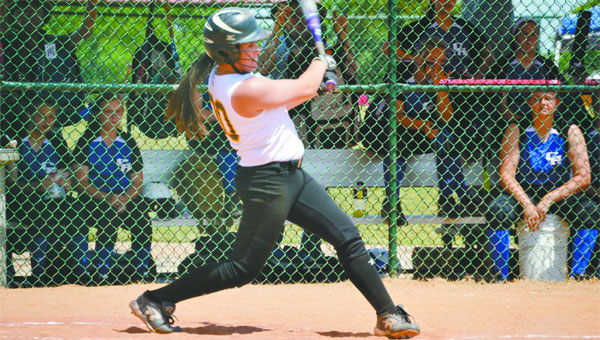 The Opp Lady Bobcats didn’t quite have the kind of state tournament that they wanted.

Pisgah eliminated the Lady Bobcats from the AHSAA Class 3A state tournament by with a 10-0 defeat in Opp’s third game.

Pisgah’s biggest inning came in the first, when they plated four runs with a two-out rally.

They picked up two more runs when the Lady Bobcats defense allowed an infield fly to fall safely to the ground.

The rain began to fall in the fifth inning, and a few errors and base hits allowed Pisgah to plate the three winning runs.

After falling in round one, the Opp Lady Bobcats eliminated the No. 2-ranked Oakman Lady Wildcats with a 1-0 win Thursday in round two of the AHSAA Class 3A state tournament in Montgomery.

After giving up a season-high 12 runs to Colbert Heights in round one, the dynamic duo of Anna Harrelson and Courtney Chatham teamed up for a two-hit shutout of one the top teams in Class 3A.

Harrelson got the start and the win on the pitching circle for the Lady Bobcats and went five innings, giving up one lone hit, and striking out two.

Chatham entered the game in the top of the sixth inning, and after giving up a leadoff single she retired the final six batters to pick up the save for the Lady Bobcats.

The lone run in the game came in the bottom of the fourth inning when Paige Johnson drove in Chatham with a RBI-single.

“The first game we played today, we were real tight,” Lady Bobcats’ head coach Jimmy Reeves said. “Colbert Heights has very good team, and they hit the ball and we didn’t. In the second game, we played much better. Anna (Harrelson) pitched five strong innings, and (Courtney) Chatham came in and did a great job to get the save. I brag on my pitchers a lot, but I need to brag on how good our catcher (Tori Reisnour) has been. She (Reisnour) is one of our senior leaders, and she has done such a good job calling games for us. I’m very proud of the way our seniors contributed today.”

Colbert Heights hammered the Lady Bobcats 12-2 in Round 1 at state tournament.

Anna Harrelson got the start in the pitching circle for the Lady Bobcats, and hit the first batter she faced with the first pitch she threw.

After hitting Destinee Pratt to open up the game, Harrelson got two quick outs before a single from Caroline Clark put the Lady Wildcats up 1-0 in the top of the first inning.

The Lady Bobcats went quietly in the bottom of the first, and the Lady Wildcats plated four runs in the top of the second to take a 5-0 lead.

Kaelyn Holt drove in three runs with a triple that was nearly caught by the Lady Bobcats’ diving left fielder. The ball rolled to the fence down the left field line allowing Kylie Robinson, Emma Jones and Pratt to score.

Opp threatened in the bottom of the second, after Loryn Praytor reached first on a bunt with two outs.

Praytor got to third after a ball hit by Katlynn Schively was booted by the Lady Wildcats’ second baseman, but a pop out ended the inning one batter later.

In the top of the fourth inning, the Lady Wildcats added to their lead when Holt drove in Kendra Saint with a double. Holt came around to score a few batters later on a passed ball to put the Lady Wildcats up 7-0.

Two runs off a two-out error by the Lady Bobcats in the top of the fifth gave the Lady Wildcats a 9-0 lead with two and a half innings left to play.

The Lady Bobcats broke onto the scoreboard in the bottom of the fifth when Courtney Chatham drove in Sara Ballard with fielder’s choice.

After reaching on a single, Katie Spurlin scored the Lady Bobcats’ second run when she crossed following a wild pitch.

The Lady Wildcats added to their lead in the top of the sixth inning, when Clark hammered a two-run home run over the fence in right center to give her team an 11-2 advantage.

In the top of the seventh, the Lady Wildcats added one more run to take a 12-2 lead.

Tori Reisnour reached to lead off the bottom of the seventh for the Lady Bobcats, but was doubled up on hard hit ball by Chatham to the Lady Wildcats’ second baseman.

Organizers of this Saturday’s sMiles for Megan 5K Run and Walk will have race packets available for pickup from 5:30... read more