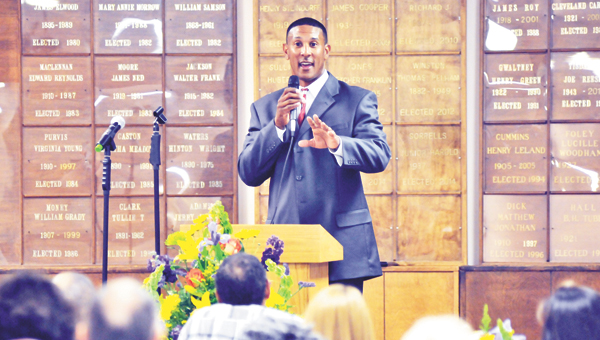 Former Seattle Seahawk and Opp native James Logan credited working at IGA and with the city of Opp’s street crew for his success on the gridiron.

The 1991 OHS graduate was the keynote speaker at the Opp and Covington County Chamber of Commerce Membership Banquet and Hall of Fame Induction.

He was named One of Opp’s Very Own.

Logan said he worked during the summers on the asphalt truck in Opp.

“That made me,” he said. “I came home during the summer and asked the city could I get my job back. It got me in shape. If it weren’t for Opp, I probably wouldn’t have been out there.”

Logan said in his high school days of football he had became discouraged and was going to quit, until his brother told him he had skills and not to give up.

He had the opportunity to play for Southern Miss, but his ACT score wasn’t high enough.

Instead, he signed with Jones County Junior College in Mississippi.

Logan said there were many obstacles and temptations.

“I saw a lot of drugs,” he said. “I could have easily gotten into the wrong crowd, but I decided I was there for business, not pleasure.”

Logan said he even reached out to his coaches for help.

He said there were plenty of football players using drugs, including cocaine.

Logan didn’t have time for that kind of distraction.

His days began with 5 a.m. practices, classes, a noon practice and an afternoon practice.

Logan said he prayed for God to be with him.

“I was around some of the same things as in Mississippi,” he said. “I was there for business not pleasure.”

At pro day, Logan said he was asked where he was from.

“I said Opp, Alabama, home of the Rattlesnake Rodeo,” he said. “They didn’t know where that was.”

He asked them did they know where Andalusia, Luverne, Brantley, Enterprise and Crestview, Fla.

“The NFL is strictly business,” he said. “If you are weak-minded you are not for the NFL. So many guys come to the NFL and quit. They don’t tell people that, but there are 10 people for each team to quit.”

Logan said he was given a thick playbook to learn.

Logan said he made a statement with the Seahawks and they took a chance on him.

“I made a good name for myself,” he said. “I was blessed with all kinds of opportunities.”

Logan said he has a good family to stand by his side.

Logan was inducted into the Hall of Fame at Jones County Junior College as a freshman linebacker credited with 74 tackles and 43 solo stops. He was also recognized as a sophomore linebacker for 136 solo stops in 10 games including one touchdown.

He is currently a physical education teacher and assistant football coach at Daleville High School.