Hunts honored for 20 years of GACD 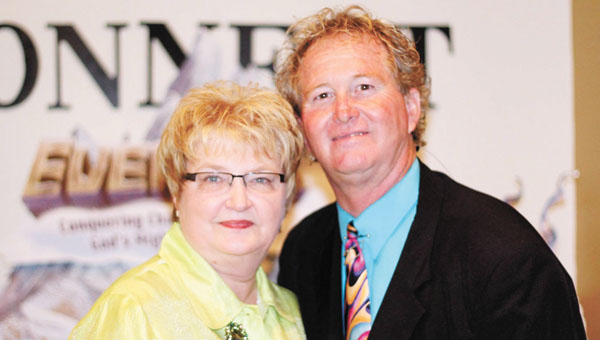 The Rev. John and Theresa Hunt were honored for their vision of the day care.

“I know this is the attitude and lifelong ambition of two very special people sitting among us tonight,” said Travis Day. “In 1995, a dream became reality when a few women of Andalusia Full Gospel Tabernacle, under the leadership of Mrs. Theresa Hunt, decided to provide a place where children could be given a ‘home away from home.’”

The daycare started with one infant in a small building and has since grown to a 16,000 square foot facility with 190 children and 34 employees.

“GACD has come a long way in 20 years,” Day said. “Many long days and nights of prayer, painting, cleaning, upgrading, rearranging and of course, Mrs. T’s endless obsession for redecorating, Guardian Angel has stood the test of time and become the premier establishment for child care in our community.”

Day said the Hunts’ relentless desire to minister to the children of Andalusia and the surrounding area has not gone unnoticed or unappreciated.

“Thousands of children later, many of which are now graduating high school, attending college, or have already entered the work force, their heart for children and faithfulness to this ministry still shines through,” he said. “Tonight, we celebrate the 20th anniversary of a dream that was planted in two servants’ hearts to serve our children and their community, and we would like to take this opportunity to say, ‘Thank you.’”

Fellow pickers and musicians have banded together to put on a benefit for Harold Stricklin, which will be held today... read more