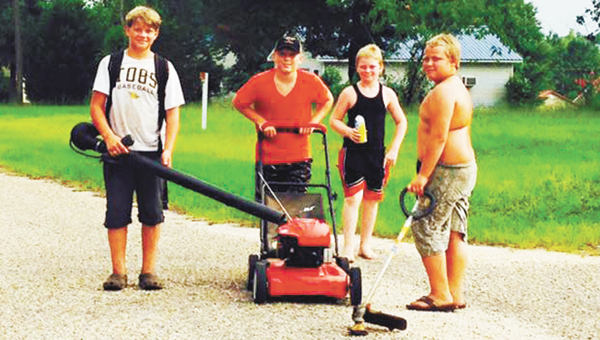 Jordan and Jade Jones, Hayden Hall and Brett Burgess needed cash and they needed it fast.

The quartet decided to bear the summer heat and cut grass for those who needed their yard cut.

All of their efforts netted $300 and the opportunity to go to the carnival during the 24th of June celebration in Florala.

The Florala kids decided the best way to earn the much-needed cash was to cut grass, blow leaves and wash cars.

To help them out on their big task, 7-year-old Bubba Parker joined in the work.

From Tuesday to Thursday, the boys weedeated, cut grass and blew clippings off of the sidewalks and earned more than $300.

Their profits were so big that they were able to take their parents out to eat at La Rumba’s in Florala.

Jones said each of them bought arm bands at the carnival.

In total, the the quintet worked nine yards.

So fun in fact, that Jones said they won’t forget encountering a dog in a yard.

“We walked into this one yard, and we had a dog come out and bark at us, but he was trying to lick us,” he said, laughing. “We had fun together as a family, trying to help people out getting grass cut who couldn’t.”

Jones said that the crew isn’t done cutting yards as they plan on continuing their money-making venture in the future.

Jordan and Jade are the sons of Crystal and Jeremy Jones; Hall is the son of Mike and Casandra Hall; and Burgess is the son of James Burgess.