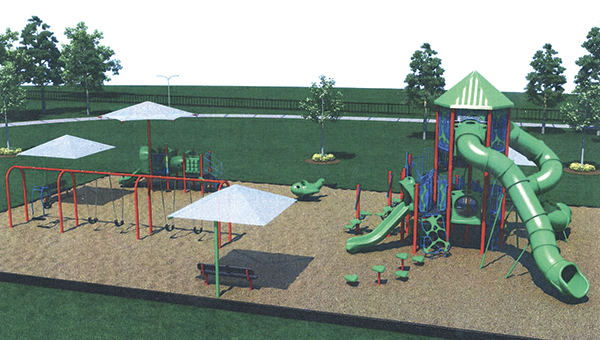 The playground is 84 feet long and 48 feet wide. The new playground will feature multiple slides, swings, bouncers and other interactive features. Additionally, there will be several shaded areas with benches. | Courtesy photo

Kids in Florala will have a new source of entertainment as the city council approved a more-than $114,000 playground that will be built at the old armory.

The Florala city council approved the project at its Monday night meeting, giving J.A. Dawson and Co. the go ahead to install the new addition.

Florala Mayor Robert Williamson said the city has raised $124,000 for the playground.

“Everything is within the confines of the bid law,” Williamson said. “We want to get going on this almost immediately.”

The playground is 84 feet long and 48 feet wide. The new playground will feature multiple slides, swings, bouncers and other interactive features. Additionally, there will be several shaded areas with benches.

Much of the wait on this project has been the old armory. Recently, the council voted to demolish the armory to make way for the playground.

“We’ll likely need an environmental abatement because of the asbestos and lead paint in the building,” he said. “I called the state (Alabama Department of Environmental Management) and they said ‘yes’ to the abatement before any work is done to tear it down.”

The playground builder said that the grassy area at the armory is enough room to build the playground, Williamson said.

Williamson said he hasn’t had any individuals or contractors who are interested in tearing the armory down for parts.

Williamson said the abatement would cost roughly $10,000 just to determine how to tear it down.

With Monday’s approval of the playground project, the city can decide what to do about the armory at a later date, Williamson said.

“I want to get this playground going,” he said. “That is a piece of property we know we own. It’s large enough, and we don’t have to address the armory issue immediately.”