Officers made 32 possession of marijuana arrests and 11 minor in possession of alcohol arrests at a driver license and sobriety checkpoint on Alabama Hwy. 55 north Friday night. 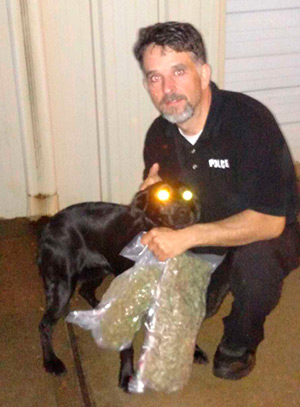 More than 2,500 cars went through the checkpoint, which was funded with a grant from the Children’s Police Council and involved 25 officers from the River Falls and Red Level police departments, the Covington County Sheriff’s Department, and the ALEA troopers.

Five minutes after the checkpoint started, ALEA Trooper Chase Amis was approached by a vehicle driven by Antavis Carter, a 35-year-old male from Fort Walton Beach. Trooper Amis smelled a strong odor of marijuana emitting from the car and pulled him to the side of the road. River Falls Police K9, Juree ,was introduced to the vehicle and alerted to the presence of narcotics. A search revealed approximately two pounds of high grade marijuana. Carter told officers that he paid $2,100 per pound for it and that he was headed to sell it for $4,200 dollars a pound. Officers also located a handgun in the car.

Also on Friday, Officer Cole Mock with the Andalusia Police Department made a traffic stop on Hillcrest Drive on a vehicle driven by Noah Dewayne Elmore. During the stop, Mock located a substantial amount of methamphetamine in the vehicle. Elmore was charged with possession of a controlled substance and possession of drug paraphernalia.

On Sunday, Officer Mitch Scofield stopped a vehicle driven by Geoffrey Kyle Flagg on King Avenue in Opp. During the stop it was determined that Flagg was wanted for manufacturing methamphetamine in Covington and Geneva counties and was arrested. A search revealed another meth lab that included more than 250 grams of meth oil.

Flagg was placed in the Covington County Jail on the warrants and the new charges of manufacturing first, drug trafficking, and felony drug paraphernalia. His bond on the new charges was set at $1.1 million dollars.