Hughie Atkison has given his barber shop, Hughie’s Hair, a facelift.

The Red Level native, who opened his barber shop in November 2014, said he was recently able to renovate it to his vision.

Located on Ealum Mill Road near Hwy. 84, Atkison’s shop includes two chairs and will soon have a special room for shampooing. 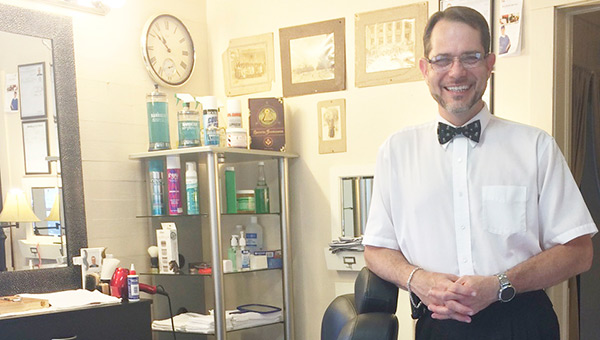 Hughie Atkison stands in his barbershop.

Atkison said he hopes that his shop can become something like Floyd’s Barber Shop in Mayberry from the Andy Griffith Show or a gathering place like in the movie Barbershop.

Atkison, who has worked in radio most of his life and then a little in retail said his barbering career came from a tradition of his and his father’s.

“I was unemployed for a year out of retail,” he said. “Me and my father had ritual to get our hair cut together. We would go up to Wiggins Barber Shop. One day, I was paying attention to Robin cutting hair. I noticed it took her about 12 minutes to do it and she charged $12 to do. I thought, ‘I think I could do this.’”

Atkison said he posted on social media and it was a big hit among friends.

A representative of Reid State Technical College in Evergreen contacted him.

“She told me that barber classes were starting next week at Reid State and that I could get it paid for,” he said.

Atkison said they watched videos of cuts the first day, but then they also had hands-on.

“I remember the first time I cut a head,” he said. “I did a pretty good job, and my professor was impressed.”

Atkison said he noticed that making a 90-degree cut was similar to carpentry.

He said he explained that to his teacher, who was amused by his thought process.

“She told me, ‘well you build a pretty good deck,’” Atkison said.

Atkison is board certified and specializes in face, standard tapered cuts, children’s cuts, razor cuts for women and invisible layers.

“And I always sterilize my tools,” he said. “That’s very important to me.”

He is open Monday through Saturday from 8 a.m. until 5 p.m.

Conserve Alabama. That’s what the Alabama Soil & Water Conservation Committee is working to do. On Wednesday, the organization will... read more