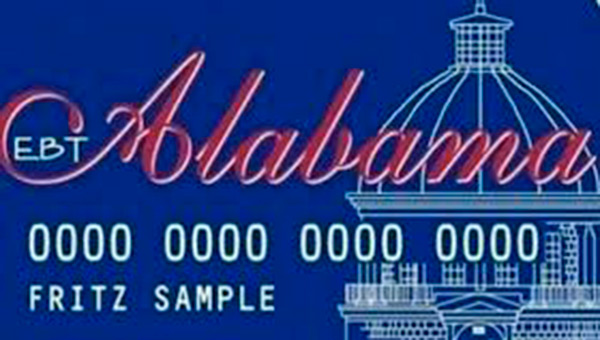 That equates to about 20 percent of the more than 37,000 residents of the county.

Data from the USDA Economic Research Service shows that participants received an estimated $11.6 million in benefits each year, or roughly $1,500 per person per year.

The program has garnered attention in recent days thanks to a bill sponsored by Sen. Arthur Orr, R-Decatur, which would create new restrictions on program such as SNAP, or food stamps, and Temporary Aid to Needy Families (TANF).

Under the bill sponsored by Orr, those receiving TANF would only be eligible for three years, as opposed to five years.

Additionally, those receiving TANF benefits would be required to sign a written contract promising to adhere to program requirements.

Additionally, Department of Human Resources employees would no longer be able to seek work waivers for those who receive SNAP benefits and EBT cards would have photographs on them.

The bill also would change asset calculations, which currently allows for people to own cars.

Opponents of the bill are arguing that the bill requirements would make it difficult for recipients to ever make it to self-sustainability.

The law would require Medicaid to implement new procedures to ensure that recipients are eligible.

According to the state Department of Human Resources, about 27,073 people in the state or 11,923 households received TANF benefits in the month of January.

Seventy-seven percent of those were children.

The average SNAP benefit for an Alabama households was $261.81 for a month.

IRT Pistol competition to be held in April