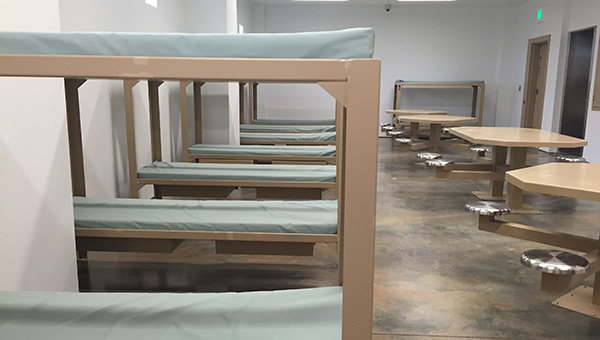 Almost two years after the Covington County Commission awarded the bid for an addition to the county jail, members joined Sheriff Dennis Meeks and a number of contractors, architects, engineers, and building officials for what they expected to be the final inspection.

But when the electrical engineers started testing the electronic locks on the facility Thursday morning, local public officials soon left county maintenance supervisor Kevin Kennedy to work with the architects and engineers, who had to test every device in the facility.

The original plans for the addition, drawn by PH&J Architects of Montgomery, were for a 42-bed, two-cell block facility that includes a nurse’s station, washroom and storage area. Each cell block has two showers, two sinks, and two toilets. Plans were later modified for only 38 bunks. The facility was planned to provide additional space to house female inmates.

But like other prisons and jails in Alabama, this wing is expected to be at capacity the day it opens – if commissioners accept it as completed. Meeks said the current jail facility was built for 180 inmates, but housed 220 Thursday morning. He estimated that 40 of those inmates were female, and said he believes there is space for additional bunks in the new cell blocks.

Commissioners Bill Godwin, left, and Harold Elmore inspect the concrete and fencing in the exercise yard of the new women’s facility.

Several commissioners expressed concern about cracks in the concrete floor of the new facility, and a number of other small details.

It is expected that the architects will recommend the commissioners accept the project at their next meeting. The project has been in the works since 2013, when PH&J Architects were hired. The construction bid was awarded in April of 2014.

Commissioners expressed concern over concrete finish work and cracks in the new floor.

This is an example of one of two showers in each of the new cell blocks. This one is designed to be a handicapped accessible shower.

Drug Task Force officers arrested this woman on Stanley Avenue Tuesday afternoon after she attempted to elude them. The woman,... read more