Bowden sworn in as circuit judge 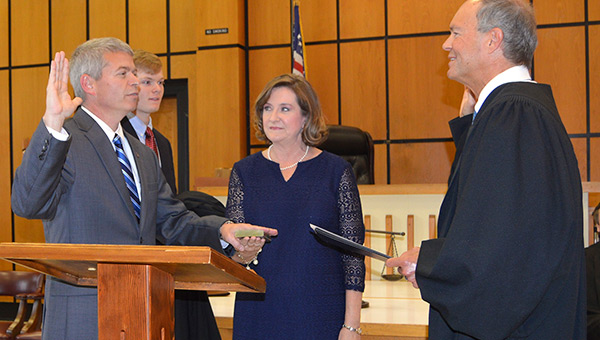 After Ben Bowden was sworn in as circuit judge in Covington County Thursday, he shared the biblical story of Shadrach, Meshach and Abednego.

King Nebuchadnezzar threw the three young men into a fiery furnace when they refused to deny their god, whom they said would sustain them, even in the fire.

“The response of the three young men was that God would sustain them,” Bowden said. “The outcome didn’t matter.

“Like them, I knew going in to the election that God had a plan for me,” he said. “The work is ours, but the outcome is all His.”

Bowden, who for seven years has served as probate judge, was elected March 1 to a circuit judge term that begins in January. Gov. Robert Bentley appointed him last week to fill the remainder of retiring Circuit Judge Ashley McKathan’s term, effective yesterday.

“I’m not sure if I’ve been delivered from the fire or if the furnace is heating up,” Bowden said. “I happened to be around Tuesday, which was Judge McKathan’s Last day as circuit judge. I’ve never seen a happier face. That frightens me just a little.”

Bowden said he experienced a range of emotions Thursday morning.

“One of these is a touch of sadness as I leave me job as probate judge,” he said.

Bowden said he will never forget the sense of relief he felt when he first met with then Chief Probate Clerk Karen Lawson after he was appointed.

“There was such a sense of relief that that part of office in was good hands,” he said. “If we were successful there, and I believe that we were, credit belongs to the staff of that office.”

He thanked probate employees for working with him.

Bowden’s parents and other family members watch proudly as he is sworn in.

“Thank you for standing with me as I was working so hard to leave you,” he said. “I hope that’s a testament to how important the courtroom is to our society and to our democracy.”

Bowden described the courtroom as the place where government is truly of the people, by and for the people.

“It’s the place where scores are settled, wrongs are righted, and good people clear their names,” he said.

But he also recalled funny stories from days in which he prosecuted or defended cases in the courtroom where he will now preside.

“I had a client who acted like he was going to jump out that window,” he said. “As he got closer to the window and nobody had grabbed him, he slowed up.

“I was practicing law in the Air Force before I got here, and that was rather formal,” he recalled “The first case I got, Mrs. (Eugenia) Loggins said my client was sorrier than gully dirt because she wouldn’t pay her fines.”

Another day, when Bowden was defending a case, a juror sent a message to Judge Lex Short that Bowden’s tie was “making her feel like she was gonna throw up.”

The court system exists for the sole purpose of protecting the rights of ordinary citizens,” Bowden said. “It’s not appropriate for me to talk much about judicial philosophy, but I take seriously my obligation to protect the courtroom, and I’ll work hard to protect integrity of the law.”

Bowden thanked a close group of family and friends who worked with him in his recent campaign for office.

“You know who you are,” he said. And he also thanked former District Judge Trippy McGuire, who administered the oath of office Thursday.

“When I came to the courthouse seven years ago (as probate judge), for no apparent wing, he took me under his wing. He has been a mentor, spiritual advisor, and campaign manager. I am so proud to call him my friend, and I can never repay him.”

When Judge Bowden donned his judicial robe after taking the oath, the zipper stuck.
“It’s a good thing my mama is here to dress me,” he joked.
Sarah Bowden replied quickly, “I’m just thankful it’s not the other zipper.”

“My parents are living examples of Christian compassion,” he said. “If I know anything about judging people, its’ because of the example they set for me.”

Bowden is a native of Brundidge, where his parents still live. Pike County Probate Judge Wes Allen was among those in the filled-to-overflowing courtroom when Bowden took the oath Thursday.

“He has been reminded by my sweet mother every time she has seen him that he is the second best probate judge in the state,” he said. “The morning after I won the election, she called to tell him he is now the best probate judge.”

Gov. Bentley has not yet appointed Bowden’s successor to the probate judge’s office. 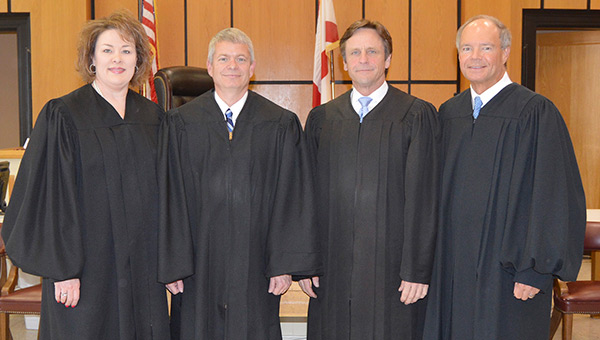 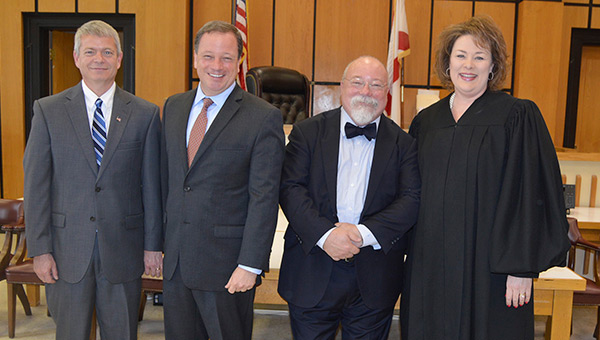