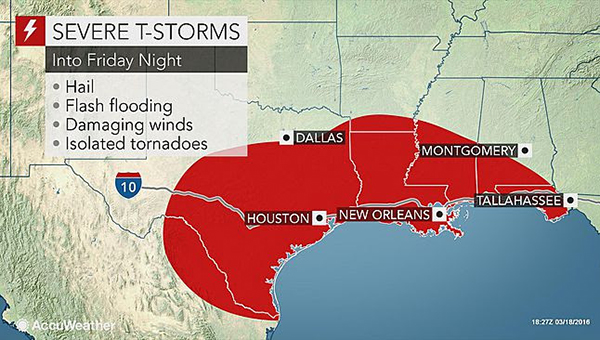 AccuWeather reports an area of rain and thunderstorms will expand along the Gulf coast of the United States into Saturday, prolonging flooding in some locations and becoming severe in others.

How quickly a storm develops along a stalled front will determine the northern extent and intensity of the rain across parts of Texas to Louisiana, Mississippi, Alabama and Florida.

In most cases, the greatest amount of rain is likely to be confined to the south of the Interstate-20 corridor. Portions of the I-10 corridor will receive 1-2 inches of rain into Saturday morning.

Portions of the South Central states, from the Gulf coast to near and north of I-20, received 1-2 feet of rain last week. A few locations in northern Louisiana received more than 2 feet of rain.

The rainfall sent small streams quickly out of their banks. Portions of the Sabine, Little and Bogue Chitto rivers and others reached record flood stage this past weekend.

The slow-moving nature of the flooding over the flat, swampy terrain continues to cause moderate to record flooding in many rivers in the region.

To date, the flooding has taken the lives of six people, damaged nearly 5,000 homes in Louisiana and 800 homes in Mississippi, according to the Associated Press. The National Guard has rescued nearly 3,300 people.

Stretches of the Sabine, Red, Little, Leaf, Big Sunflower, Bogue Chitto and Pearle rivers will remain at or above moderate flood stage through next week due to rain that has already fallen, even if no additional rain were to fall through next week.

Portions of the lower Red and Quachita rivers will continue to rise in the absence of additional rain.

Due to the saturated state of the ground, even an inch or two of rain will can cause renewed incidents of flash and urban flooding late this week.

Some small streams may quickly spill out of their banks once again.

The recession of water levels along the rivers could stall.

Another potential storm with heavy rain could affect the region on or shortly after the Easter weekend.

Thus far, rainfall has had minimal effect on the lower Mississippi River.

Most of the rain has fallen on the Mississippi Delta, where a significant amount of water flows away from the main stem of the river, before reaching the Gulf of Mexico.

The forecast rain in the Deep South is from the same storm that could bring snow to part of the mid-Atlantic and New England coasts later this weekend and into Monday.

An Alabama Department of Transportation project began this week that will include work in Florala, Andalusia, New Brockton, Enterprise, and... read more