Add some love to your life

Crawfish, crawdads, crayfish, creekcrabs, mudbugs. Whatever you call them, these freshwater crustaceans are harbingers of spring in Cajun Country. March is prime time for crawfish, when they are big enough to feed a crowd, and lower in price. 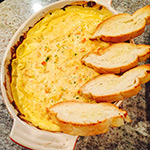 Like their shellfish cousins shrimp, they are typically the star of a seafood boil, with supporting roles played by potatoes, corn, fistfuls of Zatarain’s, and of course, lots of cold beer.

Every year I like to try some new recipe with crawfish. This week I tried a recipe called Crawfish Love Dip. Boy was it good! It would be great for a party since it made a lot and with hot crusty bread it was delicious. We made two meals out of it.

Like Elvis sings in “Crawfish,” the opening track of his 1958 film King Creole, “If your fry him crisp or you boil him right/ He’ll be sweeter than sugar when you take a bite.”

Place all ingredients except crawfish in food processor until combined.

Pour into a baking dish and bake until bubbly, about 15 minutes.

I was reading my new issue of Palate and found a very nice article about an up and coming woman... read more