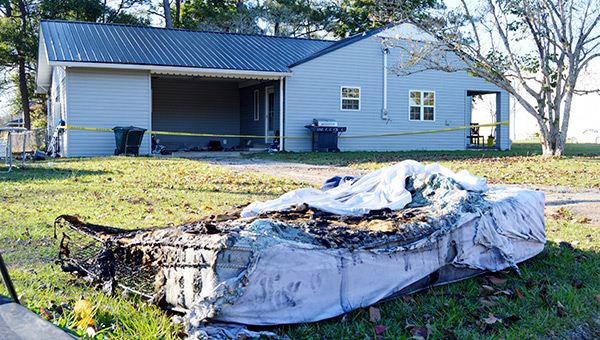 Shown is a burned mattress in front of the home at 304 East Pass Road.

The state fire marshal’s office on Wednesday confirmed it has charged a Red Level man with arson in the November 2015 structure fire.

Fire Marshal’s Public Information Officer Stephen Holmes said that the investigator assigned to Covington County signed a warrant for Jacob Ainsworth, who was reportedly working out of state at the time of the warrant.

“This arrest warrant was apparently served by Coffee County Sheriff’s office while our deputy state fire marshal was himself out of town,” Holmes said.

According to the arrest affidavit, local authorities contacted Paulk on Nov. 26, 2015, at 6:08 a.m., to investigate a structure fire.

The fire occurred the same day around 3:14 a.m.

On Nov. 27, the reporting deputy from the fire marshal’s office met then-Andalusia Fire Chief Ethan Dorsey at the scene.

Chief Dorsey said the owner of the home was out of state for the holiday, and the structure was secured by the fire department when they left the scene.

Fire Marshal’s Jeffery Lowery conducted the investigation and revealed there were two points of origin inside the residence.

“The first fire was in the living room in a chair by the front door,” the report reads. “Examination revealed this fire was started using open flame device using ordinary combustible materials. There was no other means of ignition source that could start this fire.”

A second fire was started in the master bedroom on the right side of the bed and nightstand.

“The fire was on the mattress against the headboard and nightstand,” according to the report. “Examination revealed the fire was started by using open flame using ordinary combustible materials.”

The rest of the home had heat and smoke damage.