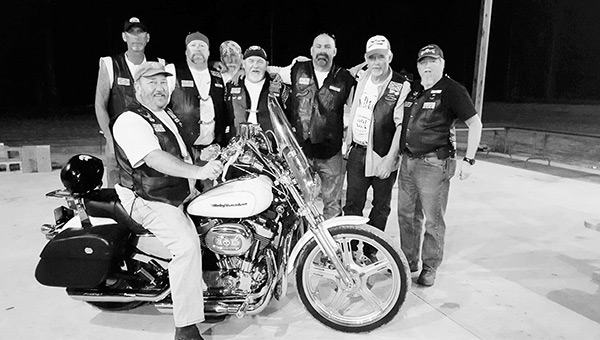 Gantt Mafia Benefit ride for the Wounded Warrior was held Saturday at Cypress Landing just outside of Gantt.

Forty-four bikes registered and rode in the run, which included five stops from Gantt, Opp, Red Level, and Cypress Landing.

“They sold barbecue plates to a ton of people,” said Mellisa King, wife of Bruce King, one of the organizers.

“There were more than one person on most bikes and there were people there to just enjoy the entertainment.”

Last week, organizer John Zorn said the group wanted to do the event because “it’s been publicized here lately that there are some things that have been going on that aren’t real good for soldiers.”

“This is our way of helping wounded vets and vets in general,” he said.

King said the event netted $4,400 that will be donated to Wounded Warriors.

“They would like to thank all the sponsors and participants for making this possible,” she said. “And a big thanks to Cypress Landing RV Park for hosting the event.”

Mayor Earl Johnson presented a proclamation to members of the Sasser family Sunday during the celebration of Andalusia Manor’s 25th... read more